Age-based expectations for rookies based on early performance.

We are at the stage in the season when a lot of fans are reevaluating their lottery picks and asking questions like...  "Does my #1 pick's complete failure mean I should stop hoping or can he turn it around?" or "My team's lotto pick is not a star yet, but he is doing pretty darn well so can I expect him to get better?"  In this article I throw together some lists and regression plots to help folks put their expectations in a proper context.  I am looking at 362 NBA lottery picks drafted since the mid 80s, all of whom we have observed until at least age 25.  My interest is in understanding what prospects' early performance tells us about their future success.

Question 1:  My lotto pick looks terrible... will he get better?

A common notion is that you need to cut young players a lot of slack, and what you should really be looking for is ‘potential' rather than what they do on the court.  There is a definite grain of truth to this.  The standards are much lower the younger a player is, however, the best players are almost always productive right from the beginning.  No player peaks at 19 or 20, but the examples of players who struggled even at those extremely young ages turning it around are few and far between.

To get this idea across I am going to present a series of lists with players below the benchmark of 2 win shares in a season.  First, the 19 year olds:

Small sample, but it tells a pretty consistent story.  We have one clear success story (Chandler) and a couple guys who became contributors, but the majority of this group never became legitimate NBA players.  Current players who may finish the season under this benchmark are Archie Goodwin (-0.4 at this point) and possibly Giannis Antetokounmpo who is currently only at 0.9 win shares but I expect to eclipse the 2 WS mark by this season's end.

Next we look at 20 year old players to tally less than 2 win shares:

Dirk is the only clear star to come out of this group, but there are a couple other guys who ended up being important players.  Still, overall this is not a group you want to find yourself in.  Current players who this list may apply to include: Otto Porter, Ben McLemore, Michael Kidd-Gilchrist, Sergey Karasev, Dennis Schroeder, Marquis Teague, Tony Wroten, and Anthony Bennett.

What about 21 year old players?

I won't post the lists for guys who are 22 or 23, but trust me that the chances of failing at those ages and beyond but ultimately becoming a good player are extremely slim.

Question 2:  My lotto pick looks good at a young age... can I expect him to become a star?

Here is where the age difference really becomes obvious.  Star players are almost always "good" young, but there is a big difference in standards for a 19 year old as opposed to a 21 year old.  We just looked at lists mostly comprised of failures who posted less than 2 win shares, but if we only bump that standard to more than 3 the contrast is stark for the youngsters:

Does not get much more certain than that.  Unfortunately this group does not apply to any players in the current crop.

What about players who first pass the 3 win share threshold at 20 years old?

Again, lots of success stories... but note that most of the true stars have already moved well beyond the 3 win share threshold by 20.  Anthony Davis and Andre Drummond have placed themselves among those players already flying high and destined for stardom.  Steven Adams is on pace to comfortably clear the 3 win share benchmark.  Bradley Beal, Kentavious Caldwell-Pope, and Maurice Harkless look like they are going to squeak by into that group just above 3 win shares.

Then there are the guys who don't pass 3 win shares until they are 21, either because of mediocre early performance or staying in college:

Again, if you are contributing at even a relatively low 3 win share level as a 21 year old, odds are very good you have a future in the NBA... however, note that most the guys who eventually became stars were well beyond that benchmark at this point.

So, these lists are interesting, but it is difficult to get a good picture just looking at lists of players above or below some arbitrary cut-off.  What we are going to do now is look at predicted-probability plots which help us understand the inflection points that distinguish a future star/contributor/bust.

The first plot gives us the likelihood of a player becoming a "star", defined here as 10+ win shares in a season by his 26th birthday.  This isn't always the goal with a lottery pick, but usually teams are gambling for a guy that deserves a max-contract offer as his rookie contract ends: 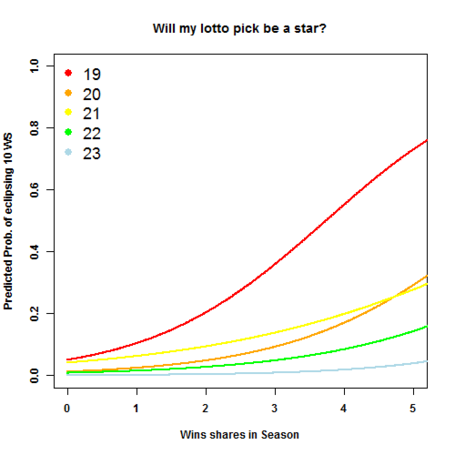 [How to interpret these plots:  The x-axis (bottom) is how many win shares a player tallies in a season.  The y-axis (left side) is the predicted probability from 0 to 1 that the player will ultimately reach whatever potential based on win shares in a season.  Each line shows the relationship between win shares and "potential" at each age organized by color.  So, for example, a 19 year old posting 3 win shares has just under a 40% chance of becoming a star, while a 23 year old doing the same has virtually no chance.]

As you can see, the standards for 19 year olds are quite low.  As a player approaches 5 win shares in a 19 year old season, his likelihood of eventually producing 10+ approaches 80%. However, as we saw in the lists above, guys who completely fail even at a very young age are unlikely to become the next NBA star.

The other interesting pattern in this plot is that 20 and 21 year olds are about the same.  In fact... it looks better to be producing at the same level at 21 rather than 20.  Obviously I do not think that is capturing reality, but it does imply that 20 and 21 are virtually the same in terms of star potential.  Finally, note the sharp drop-off in "potential" at 22 and 23.  If you aren't producing at a high level by your 22nd birthday, it is unlikely you will ever become a star.  This is concerning for any Philly fans hoping Michael Carter-Williams will be the next star point-guard.  However, being a ‘star' isn't everything, so what happens if we lower our standards a bit: 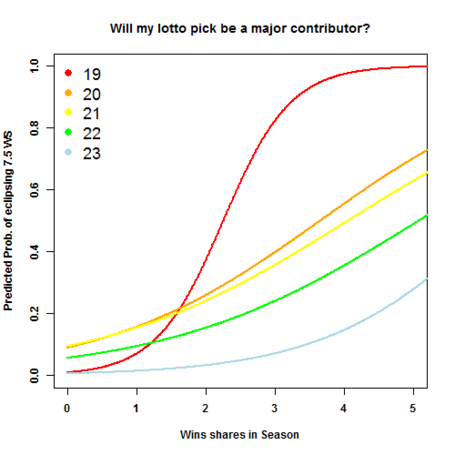 Here we are looking at the predicted probability of getting past 7.5 win-shares in a season by age 26.  This is the level of a player you love having on your team, but may not be at quite the max-contract level.  As you can see, the future looks much brighter for the Carter-Williams' of the world at this resolution.  In addition, many of the younger players who aren't complete failures but haven't shown much of a spark either look more likely to become important pieces.

Finally, what if we are just curious whether our lotto-pick is going to be a bust?  Here is a predicted-probability plot of the odds a player will never eclipse 2.5 win-shares before turning 26: 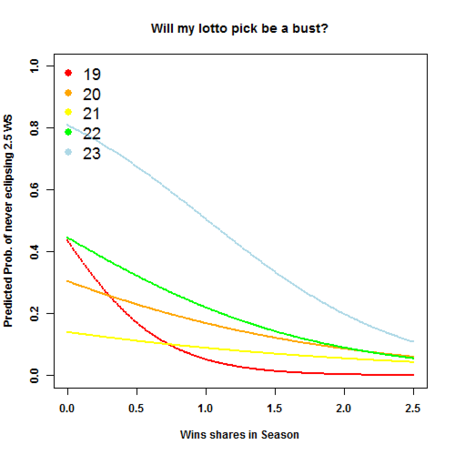 19 year olds come from a much smaller sample and are often guys who did not go through the filter of college basketball, so their odd pattern isn't surprising.  If a guy is producing at all as a 19 year old (i.e. Giannis) he is not going to be a bust.  As prospects get older the standards increase significantly.

The standards are much lower for young prospects than they are for older players, but relative production among those youngsters tells a huge proportion of the story.  Lottery-pick production at 19 explains 70% of the variance in production at 25 and this relationship is similar progressing through ages.  You know what these players are almost as soon as they hit the hardwood.  Bad rookies rarely end up anything other than bad players and good rookies typically become good players, as long as you adjust your standards for age.  So... if you are down on your favorite team's new draft pick because he looks completely lost out there, you should be.  He probably won't be very good.  Alternatively, if you are rooting for a young guy putting up solid numbers but still not at an all-star level, keep hoping.

On a different note... as someone very interested in the draft I think these patterns have implications for looking at NCAA and European prospects.  NBA folks are often as interested in "tools" and "potential" as they are current production when looking for future stars.  If we define "potential" simply as age this makes sense, but we should be pretty concerned about counting on players who do not produce impressively for their age hitting the ground running in the pros (but see: Drummond and Westbrook).  As we see above, guys who don't look good right away rarely reach stardom and often don't even manage to become contributors.  In short, don't say we just need to give Andrew Wiggins (who may be turning things around) a few years to learn how to dribble better and he will be an NBA star.  Instead, tell me how his tools will help him achieve relative success next year as an NBA player if you want to sell me on his star potential.