With 16 teams left, the competition continues with the L'Hospitalet Junior Tournament as a sideshow. Furthermore, a look at some player profiles and interviews from Euroleague TV Magazine. MVP watch returns and presenting the first few center and power forward talents that are worth keeping an eye on.

Some observers still underrate the champs Olympiacos as a real top 3 threat for this year's crown. Last week, the Greeks faced at a real test against Fenerbahce Istanbul which had the second best offense in the group stage, just above Olympiacos. Istanbul hanged in throughout three quarters despite its supbar defense (most notably by Linasz Kliza who got abused seemingly on every second Greek possession) allowing Piraeus to coast to easy baskets either at the rim or at the three point line. The signs didn't look good for Fener going into the fourth quarter even though they were behind only two possessions.

The fourth quarter was an offensive firework in which both teams combined for 59 points. Olympiacos got the better end due to a vintage performance from its icon, Vassilis Spanoulis. As a penetrating ballhandler, Spanoulis directly caused seven three point makes by Piraeus in the fourth, and breaking Fener's aspirations to make a statement. Piraues shot 43% on 28 thres and Spanoulis left the game with 28 points on 15 shots, 5 rebounds and 9 assists to just two turnovers. Fener couldn't find an answer for Super Spanoulis and threw various tall bodies at him, from super young Kenan Sipahi (when Spanoulis was super hot - poor Kenan) to similarly overmatched Nemanja Bjelica to Gaspars Vidmar who could bother Spanoulis a little with his quickness and length. Yet, Olympiacos captain always found ways to escape the pressure.

A Spanish derby had Unicaja Malaga take on surprise hit Laboral Kuxta Victoria at home. Unicaja came out strong in the first quarter, scoring 24 points to Vitoria's 13. Vitoria outscored Malaga by nine in the second quarter to narrow the lead and eventually blasted Unicaja away with an outstanding shooting performance from range. Vitoria hit 15 of 24 threes while taking only 37 shots within the 3 point line. Former Chicago Bull Andres Nocioni put in a big performance with 4 made threes for 20 points along with nine rebounds. Malaga on the other hand didn't get much offensively from one of its best players in Nik Caner-Medley who only scored three points in almost 30 minutes. Solely Goran Dragic' brother Zoran put up an excellent game with 22 points on 13 shots on a Malaga squad that didn't play bad but couldn't stop the bleeding from range.

The first Russian derby ever at the Euroleague was as climatic as the crazed Kuban fans had hoped for, yet without the result they had anticipated. Kuban's campaign to the Top 16 was carried by a strong defense and despite talented offensive players in Krunislav Simon, Derrick Brown and Marcus Williams, its offense is far from solid. This was evident in this game too as Moscow was far more efficient from the field (58% eFG to 46 eFG%) while losing the battle on the offensive glass 1-10 and thus keeping Krasnodar in the game.

Moscow was the better team and should have won rather easily but couldn't keep Krasnodar at a distance at any point in the game apart from a short 10 point lead in the second quarter. With three minutes to go in the game, Richard Hendrix even put Krasondar up against the distressed stars from the capital. Free throws by Milos Teodosic and Vitaly Fridzon put the guests ahead, but a two point shot by Hendrix tied the game again. Neither team could score in the remaining minute and the game went into overtime.

In OT, Valeriy Likhodey shocked CSKA with back-to-back three pointers, but a few more free throws by Milos Teodosic, Nenad Krstic as well as Viktor Khryapa gave them a three point lead. The game remained physical with free throws being exchanged until a three pointer by Vladimir Micov decided it in CSKA's favor. Man of the match was undoubtedly Viktor Krhyapa who had an astonishing performance of 15 points on 5-of-6 threes, 8 rebounds and 7 assists to 1 turnover.

As one of the more balanced teams, Maccabi impressed against Galatasaray with a strong run just when it was time to turn the game and put the hosts away. Istanbul led for most of the game with a narrow margin but collapsed in the fourth quarter on a 27-19 run. Ricky Hickman took on the responsibility with nine points in the last 4 minutes of playing time, securing a crucial road win for the Isreali team.

The Euroleague's youtube channel has a weekly show called "Euroleague Magazin" where they recap a special game and portrait players and teams as well as presenting the weekly MVP and Top 10. Throughout the next weeks I will post some player profiles of guys that either have played in the NBA, have their rights held by NBA teams or are future NBA prospects.

Along to Euroleague competition, the L'Hospitalet Junior Tournament was held in Spain for three days, and featured youth squads of Euroleague teams like Real Madrid, FC Barcelona, Unicaja Malaga and Fenerbahce Istanbul among others. Among the most intriguing players were Jonathan Barreiro, Vasilije Vucetic, Romaric Belemene, Ludvig Hakanson, Fernando Alonso and Jonathan Kassibabu. If I'll find the time I'll look into those guys (Hakanson profile can be found in the first guard edition).

After three days of competition, Real madrid beat Unicaja Malaga in the final after a strong performance from Jonathan Barreiro and a clutch three pointer to decide the game with seconds left on the clock. However, thin shooter Marc Garcia from rival FC Barcelona was named Tournament MVP, mostly due to a 40 points on 20 shots performance.

The son of a female basketball player who won Olympic gold in 1993 has an extensive amateur playing career under his belt. Gui participated in the U-16 Euro Championship in 2010 and played 20 minutes per game, almost averaging a double double per game with 9.9 ppg and 8.7 rpg (more ORebs than DRebs), and a ridicolous 20 pts & 23 rebounds performance in a narrow win against Turkey.

At the age of 17, Hernangomez chose to participate at the U-18 Euro competition where he managed to get 7.3 points on supbar shooting (46% 2FG) in 11 minutes, as well as 4.4 rebounds per game while being more active on the offensive than the defensive glass again. Hernangomez returned to the U-18 championship the following year in a more prominent role as a starter, showing improvment finishing at the rim while being a little shaky on defense. At the U-19 championship the next year, Hernangomez was basically unstoppable at the rim, scoring 10 ppg in just 16 minutes of play and proving once again that he can be a force on the offensive board, grabbing 2.3 per contest.

He started playing extensively with Real Madrid II in the fourth Spanish division where he averaged a double double and moved to Cajasol of the ACB on a loan for the 2013-14 season. For Cajasol, he plays around a quarter per contest in which he scored almost 5 ppg on efficient shooting (62%). Also, he remains a threat for offensive rebounds. With his great size, decent wingspan, post moves and rebounding ability, Hernangomez might be worth a look. You never know what 1-2 years of high quality competition does to a 19-20 year old, but Hernangomez' road to the NBA should be a rather complicated one. 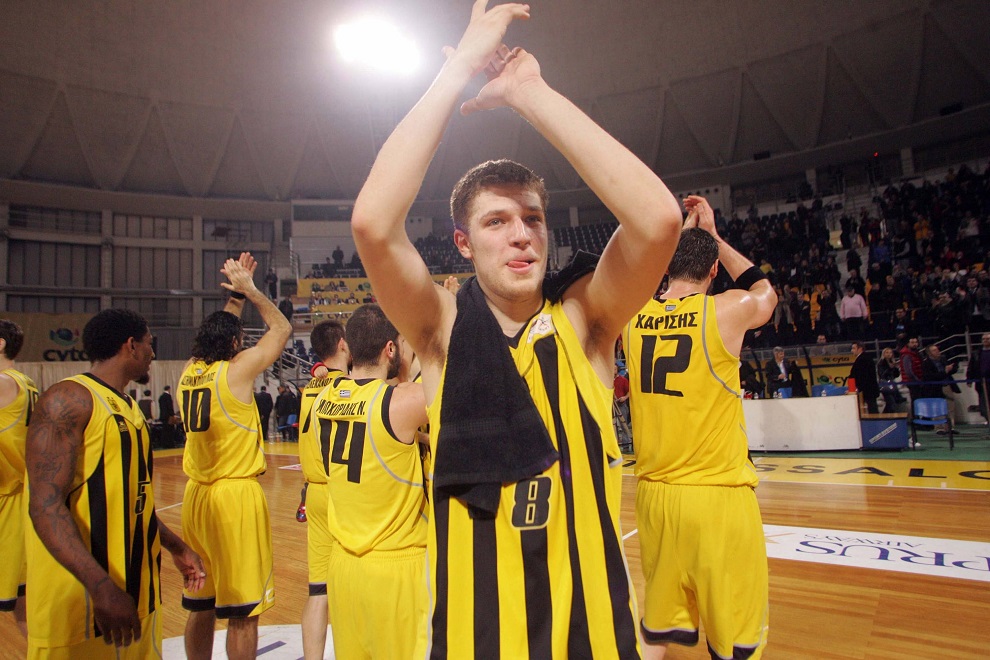 Despite being only 17 years of age in 2012, Vezenkov was a member of Bulgaria's U-20 European Championship team that achieved promotion to the A Division of Euro youth ball. Vezenkov struggled mightly against players that might not possess his talent level, but are much more mature phisically. The slightly undersized power forward managed to shoot just 39% on 2FGA, hit 1 of 11 three pointers and couldn't draw any fouls while commiting fouls himself.

Just a month later, Vezenkov was due to show his potential against his age peers at the U-18 European Championship. Going up against elite talent in the A division like Kenan Sipahi and Dario Saric, the Bulgarian held his own and led Bulgaria to the quarter-finals, averaging 16.7 points (47% on two's, 39% on 46 three's), 5.7 rebounds, 1.9 assists and 1.9 steals.This year, Vezenkov returned to the U-18 Championship. While losing all seven of their games (mostly due to a tough first round group that featured eventual bronze medal duellists Spain and Latvia), it sure wasn't Vezenkov's fault. As the team's focal point, he averaged a double double with 22.4 ppg (55% on two's and 42% on 52 three's), 10.2 rebounds, 2.9 assists and 1.3 steals.

This year is going well for Vezenkov. The Bulgarian declined playing at college after Greek team Aris Thesalloniki commited to him, giving the 18-year old almost 30 minutes per game a night. The versatile forward is paying them back with 11.3 ppg on terrific shooting (59% on two's, 44% on three's) and a streak of six games in double figures. While he hasn't been able to translate his great rebounding and steal numbers to the pro league yet, he's still showing his sharp insticts as a passer which is surprising for his age and position. While he turns over the ball 1.4 times per game, he assists on 2.3 baskets. Vezenkov is not afraid of the dirty work and goes after rebounds hard, but is comfortable with playing outside as almost 50% of his FGA come as threes. He's comfortable with spotting up two steps behind the three point line showing that he could adjust to NBA range rather quickly. This season, he's really showing that he can be a reliable player who is neither afraid of responsibility nor big names. His best game came in a 2 point win against Nea Kifisia in which he had 15 points on 9 shots, 10 rebounds (5 offensive), 6 assists to just 1 turnover. Against Euroleague champion Olympicaos, Vezenkov had 19 points on 12 shots.

With his size, shooting ability, intriguing passing fanciness and awareness, Vezenkov is one of my favorite young sleeper prospects who could turn into a hot commodity by the age of 21.

Some Clint Capela highlights at some US camp

Clint Ndumba-Capela is a Swiss power forward with tremendous physical ability (7'3" wingspan) that is very rarely seen in Euro hoops at his age. CC excels by being an extremely effective player close to the basket and an unstoppable force on either offensive or defensive glass.

Capela burst onto the scene in 2010 at the U-16 B Division Championship as one of the youngest players at the competition, yet averaging 20.4 points, 16.6 rebounds, 2.0 blocks per game and taking 78 FTA to his 110 FGA.Two years later, Capela put up similar statline at the U-18 B Division Championship - 15.7 ppg, 15.7 rpg, 2.4 bpg and a big 22 points and 27 rebounds performance against poor rival Austria.

Capela might be a little undersized to be a natural power forward, but with his lack of vision and dribbling ability he sure is not a natural wing player either with could be a problem. However, since turning pro for French team Chalon, Capela has toned down on the long 2's and 3's. In this year's Eurocup, Capela is one of the most efficient players with 71% made two's without taking a single three pointer. He rebounds 6.5 times per game and blocks 1.1 shots while scoring 11.2 himself in just 19 minutes of playing time. Yet, his shooting woes should stay a problem, highlighted by his poor free throw shooting which is sub-50% in the Eurocup and even sub-30% in the French league albeit on small sample size. For being such an active and hard to stop player under the rim, Capela draws fouls at a rather surprisingly low rate too.

Capela looks extremely interesting from a production and physicality point of view, but the position question with poor shooting could be an issue if he is not able to adjust to the intensity of inside play in the NBA. Being drafted however seems to be guaranteed, especially if another freak of nature in Giannis Antetokounmpo keeps playing a promising role in the next few years.