Home is Where You Hang Your Hat: A Timberwolves Season Preview.

It appears that yet another season of Minnesota Timberwolves basketball will soon be upon us and, as such, I feel some level of obligation to look forward to the season in a preview-like manner. Season previews are kind of a thing you know.

Share All sharing options for: Home is Where You Hang Your Hat: A Timberwolves Season Preview.

Anyway, the primary problem I have with this is that my life has suddenly been turned upside down by the all encompassing process of moving. Also, I have very little to add to this discussion compared to the detailed writers here who are paying mindful and focused attention to the team's day to to day activities. Still, I have a desire to write this preview. Now I just need an angle. Perhaps a song about moving to the suburbs will help? Or maybe a song by The Suburbs:

I feel ready now. How about you? Good. What I'm going to do here is look at this season's team through the lens of moving. This will allow me to utilize my current and obsessive mindset as I explore the the anxieties and possibilities of change as it relates to this version of our favorite basketball team. Moving brings about changes. We all understand that. Some of these changes are good, some are not good, and some will require time to assess. Other things are not really different at all. So it is with this season's roster. Seems previewy right? Let's get started then.

First let's look at the biggest negative, and it's not even close: Kevin Love is gone. This absence is analogous to moving out of the fantastic Longfellow neighborhood in South Minneapolis. 26 points and 12 rebounds per game is difficult to replace. So is walking living walking distance from the Riverview Theater, Blue Door Pub and Minnehaha Falls while also being a short bike ride away from Al Vento, Northbound Smokehouse and The Republic. Also gone is the easy access to light rail and the Midtown Greenway. Some of these things simply cannot be replaced when one is traded to Cleveland or moves to Richfield. Good bye Kevin Love. You will be missed.

Presumed new starting power forward Thaddeus Young will help. Young should be able to replace some of the points and rebounds that left with Kevin Love. It's not like the Wolves will be playing four on five this season. Young represents my now being walking distance from Pizza Luce, Wood Lake Nature Center, and El Tejaban. Sure, none of these things are the Blue Door Pub but all those taps, along with a nice patio at Luce, will really help. A lot.

Gorgui Deing is Lake Nokomis and Sandcastle. I enjoyed Dieng last season and I intend to enjoy him again this season. In fact, I expect a high usage rate for both Dieng and Nokomis in this new reality. The weird truth is that my new home is even closer to Lake Nokomis than my last one. Seems weird I know but it's true, I googled it.  Lake Nokomis has long been my favorite of the many Minneapolis lakes. I even have a canoe locked to one of the racks (I never use it but it's nice to know it's there) and Sandcastle has a chef driven menu with local craft beer to go along with a great evening view. Now that I would have to search for a parking spot and wait in line a SeaSalt I think it's fair to assume I will be seeing more of Lake Nokomis in the next few years and, judging from his late season emergence as an actual NBA basketball player, I expect the same could be said about Gorgui Dieng.

Next let's look at the rookies. By this I mean Andrew Wiggins, Zach Lavine and Anthony Bennett. Now, I realize that Bennett is not a rookie but for the sake of preseason optimism I am going to pretend believe that losing weight and learning how to breathe will make him a new person and that this new person is, therefore, a rookie. How will the rookies do? Let's hope better than this: 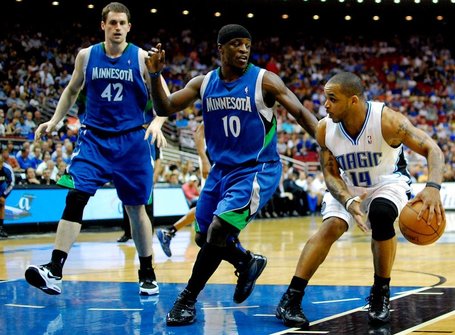 Oh for Flynn sake! I had a horrible occurrence. Last night I had just completed this article. It was amazing, probably my best work to date* and then disaster struck. I went to preview it (to ensure it's visual beauty was up to the high CH standards) and for some reason more than half of the article disappeared. I emailed Eric in Madison and he informed me that, and I quote, I was screwed. All my wonderful writing gone forever after I had worked so hard. Sure, I can re-write but obviously it will lack the pizzaz of the original. The passion is gone forever. Last night I took the time to embed a funny gif, joke and all, tonight i simply offer up this link along with the comment that I hope our rookies are better than this. Clearly I am mailing this one in from this point on.

*I'm pretty sure this is not actually true. At least I hope not.

Well, back to it I guess. I think I was talking about rookies. Here's the thing about rookies: they come with things to be excited about and things to worry about, and no clear cut way to know for sure how it will shake out in the end. Rookies are shiny with athleticism and hope and there is a glean of potential stardom surrounding them. Maybe they will be the next Mr. ___________. One thing that is universally true of rookies is that they have never failed in the NBA. Each one comes complete with advantages that might turn out. This is like Lyn 65, Richfield pool, and the new bandshell that is being built at Veterans Memorial Park.These are the things that give promise and optimism. Rookies also might suck at defense, never learn to shoot at the NBA level, and flame out within just a season or two. Let's call this suburban biking, an unfamiliar political climate, and Municipal liquor stores. Maybe these things simply represent unnecessary worry but for now I have concerns.

Let me just say a few words about Andrew Wiggins specifically. He comes to the Minnesota Timberwolves with more fanfare than most and, if the national punditry is to be believed, he is a once in a life time rookie with never ending upside (whatever that means) and the potential to be a true superstar. Yes folks, Andrew Wiggins is the new backyard. The possibilities are endless. Perhaps we will build a new patio and a brick pizza oven or perhaps, after years of hard work, I will simply give up and allow unwanted shrubs and crabgrass to overrun my family. Only time will tell.

Here is some classic heavy metal:

Next I need to talk about Ricky and Pek. I loved Ricky and Pek last season and I fully plan to love them again this season. Maybe I will even love them more. Ricky and Pek are like the new record room and my guitars. Obviously I was always going to have these things around but now there is actually room for the record player to be set up and my hope is that I will finally be able to keep an electric guitar and amp out on a regular basis. So far this situation has already paid dividends as I was able to listen to King Curtis and Champion Jack Dupree on vinyl while I cooked dinner the other night. Here is a youtube video of the whole album. Now the question that remains to be answered is whether or not Ricky and Pek will end up being as great as I think they will be. Just because I have the guitar set up doesn't guarantee that I will play it folks. Will Ricky shoot a reasonable percentage? Will Pek play 65-70 games? I guess we will all find out together. Color me hopeful though. Maybe I will even remember to listen to the Wild Tchoupitouls from time to time How sweet would that be?

Now for some bullet points:

Anyway, that's it for now. Moving sucks, at least when selling a house is involved, but it's also exciting. So yeah, it's kind of like the Minnesota Timberwolves. The only thing left to find out now is which will be higher, the total number of wins for the Wolves this season or the total number of days my old house will be on the market. For the sake of my sanity lets please all clasp hands together and hope real hard fro the former. Here is another song I like.
Go Wolves!!