The question surrounding the Montenegrin center is how much can he play without breaking down?

At this point, we know what Big Pek is: A scoring center who does a ton of work on the offensive boards and punishes opponents with his physicality. He's a classic center who gets his offense close to the basket, whether by post-up, as the roll man on the pick-and-roll, or on put backs. 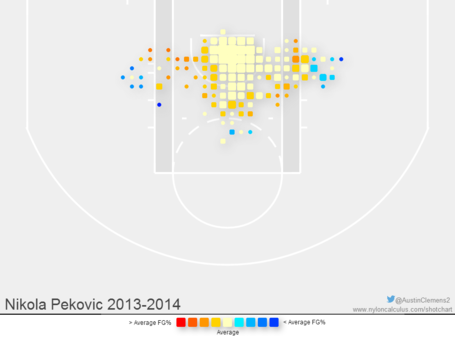 As we can see, nearly everything is around the rim. Of his 700 shot attempts last season, all but 47 of them were within 10 feet of the basket.

He gets them in a variety of ways.  He scored .91 points per play (ppp) in post-up opportunities, which was the biggest chunk of his offense. That was good for 48th in the league. His 1.23 ppp on offensive rebounds was 25th in the league, and he was a tremendous roll man, scoring 1.2 ppp, which was 14th in the NBA. I'm hoping that with the ball in Ricky Rubio's hands even more often this season, their pick and roll combination will be featured more often. Of course, there is no guarantee it will work as well without Kevin Love drawing attention, but that's true of whatever they try to run. One of the impressive things about Pek as a roll man is that he only turned the ball over on 6.1% of those plays, which is remarkable. He has terrifically strong hands and is able to catch the ball on the move--something not all big men can do.

Pekovic will be one of the focal points of the offense this year, at least at the start of the season, as he and Kevin Martin are the only two players on the roster who have shown they can carry a relatively heavy usage in the NBA with good efficiency. In addition to a heavy dose of pick and rolls, expect to see the ball entered to Pek in the post quite a bit in the half court. Given the dearth of established shooters on the Wolves, you can also expect to see a lot of double teams. A key factor in the Wolves offense this year will be how well Pek is able to pass out of doubles, and how often his teammates are able to convert those opportunities, whether they be jumpers or on cuts to the basket.

The recent news out of Wolves training camp is that Flip wants to limit Pek's minutes to somewhere around 26 a game. The hope is this will keep the big center healthy and in the lineup this season after he's struggled with injuries (especially a nagging bursa sac problem) over the past couple of years. We will have to wait to see if this has the intended effect (Pek has missed 28 and 20 games over the last two seasons), but not having Pek on the floor is going to be problematic in more than one area.

As we discussed, he's one of two established NBA level scorers on the roster (not counting J.J. Barea), which means even more trouble scoring when he's off the floor. He's the only player that can either consistently draw double teams or consistently punish single coverage.

The other issue is rebounding. Rebounding could emerge as a real weakness for the Wolves this season in the absence of Kevin Love, and keeping Pekovic on the bench isn't going to help. I've written about this before, but Pek has a big positive effect on team rebounding. Last season, the team was 4% better rebounding overall when Pek was on the floor vs. when he was off, which we can compare to Kevin Love's on/off rebounding, which was only +0.3.

Even more starkly, when the Wolves had their regular starting lineup on the floor, they were a +6.1% rebounding team; when Gorgui Dieng (the likely beneficiary of extra minutes this year) replaced Pek in that same lineup, they were an astounding -11.6% rebounding. This is despite Dieng having higher rebounding percentages individually than Pekovic.

Hopefully Dieng's increased strength this season will help with overall team rebounding, as one of Pek's abilities is occupying opponents under the glass, allowing teammates to gobble up boards. But limiting Pek's minutes is going to exacerbate what could already be a problem for the Wolves this season.

That leads us to defense, where Pek is a mixed bag. His strength allows him to hold his ground in the post and keep opponents from getting deep post position. He does fairly well against his own man. On the other hand, he is a poor weak side rim protector. He doesn't rotate well, and he doesn't block shots. It's possible that in part, this was because the Wolves had a strategy under Rick Adelman to limit fouls, and thus their bigs didn't help aggressively, but I suspect they used this tactic because neither Pekovic nor Love are good in rotation anyway. This is exactly the opposite of Gorgui Dieng's defensive attributes. Dieng was a poor post defender but a much better helper at the rim. It will be interesting to watch if and how the Wolves' defensive approach differs based on who is in there at center.

Ideally, Pek stays relatively healthy this season and gives the Wolves 70+ games while carrying the interior offensive load. The more he can play and score, the better it is for the team, both on the court and in terms of potential trade flexibility. I have no interest in moving the big man, but if he has a big year, and Dieng develops to the point where it looks like he's a starting caliber NBA center (no given), it will give the Wolves options going forward.

What are you expecting to see from Pek?