How It Got Away: A Look Back at the 2013-14 Minnesota Timberwolves

The Wolves finished the 2013-14 season with a disappointing 40-42 record. There's nothing more fun than pinning blame on people/things, so let's do that.

Share All sharing options for: How It Got Away: A Look Back at the 2013-14 Minnesota Timberwolves

In a post-game press conference not long after the All Star break, a question was presented to Rick Adelman.

I don't have the exact quote, but he said something along the lines of "we won't know for sure until season's end".

Well, the season's over, the playoffs are underway, and the Wolves are done for the year with a record of 40-42. Sure, there were injuries, but the Wolves had Kevin Love for most of the year, Ricky Rubio the entire year, and Gorgui Dieng's emergence came around the time Nikola Pekovic went down.

Injuries are more often than not the first thing people look at when trying to find a failed season's scapegoat. Going a bit deeper into things, I looked at some topics I've heard throughout the season.

We've all seen the numbers and heard the complaints. You have to bring them up, too. They're pretty gaudy numbers.

Ricky Rubio's shooting numbers were historically low. This has been repeatedly, and rightfully, brought up by writers, fans, and everyone in between. He shot the ball relatively well from beyond the 3-point line, but was horrendous from anywhere closer than that.

Again, it has to be brought up for its historical content, but when the discussion turns away from Ricky's shooting and towards a scapegoat for the season, while there might be something there, I'm not sure how much. Firstly, let's look at his pre and post All-Star Game shooting charts (please note the change in percentage around the basket):

Before the All-Star Break: 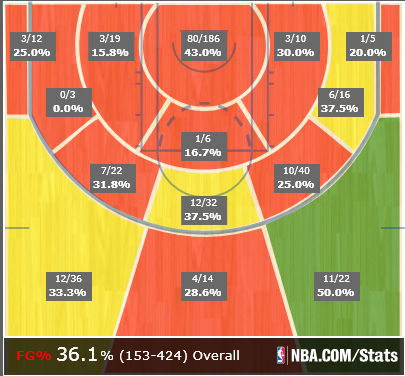 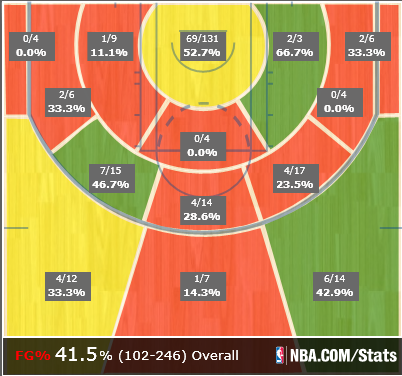 There's still a long way to go for him, no doubt, but the improvement at the rim was apparent via eye test, and it's good to see that the stats back it up.

Nevermind that Rubio's finishing has improved since the All-Star break, and still has plenty of time to get his shot together, let's focus on his role as a whole. It can be tough to statistically quantify Ricky Rubio's impact on the floor. Looking at Hollinger's PER ratings, Rubio actually sits a couple of slots ahead of Rajon Rondo, who has been noted to share some similar qualities to Rubio, including a less-than-stellar perimeter jumper. If you're looking for more players with more games than Rondo had this year, Rubio also finished ahead of Klay Thompson, Jose Calderon, Bradley Beal, and Lance Stephenson. In other words: his impact is there, whether he's hitting or not.

In addition to that, he finished the year 4th in assists per game and 2nd in steals per game (sidenote: I'm not sure how,  but there's still a belief by some that Rubio is a poor defender. This needs to end.).

A question that I've presented all year: If Rubio's shooting is that bad (it has been), and defenses know he isn't a true scoring threat, doesn't that make his ability to pile up assists that much more impressive? They know he isn't a threat to shoot the ball effectively, so they're looking for him to pass. More often than not, they still fail to stop him.

Rubio isn't going anywhere anytime soon, and like any other player coming off a rookie contract (Rubio's final year of his rookie contract will likely be the 2015-16 season), he'll want to get paid. It might be unfair to ask him to make the shooting transition that Jason Kidd made, but I also don't expect him to be a historically bad shooter after this year.

If the Wolves want to make a big jump next year, getting Rubio's shooting percentages would be a welcome addition, and would make it exponentially tougher for opposing defenses to deal with him. I still believe he can, and he'll want to if he wants a big pay day.

"The Wolves Would Have Been Better In the Eastern Conference"

Probably true. Their record would almost certainly be better, but considering how the year ended, is that really an excuse? The Wolves split two-game series with Boston, Charlotte, Washington, Atlanta, New York, Orlando and Cleveland. They also spit a pair of four-game series with Sacramento and Denver out West. That's 22 games of .500 basketball against weak competition.

They had their chances to make their record better, and past the heavily recited "record by 4 points or less" issue were the issues behind winning games they were supposed to win.

There was a stretch in mid-January when the Timberwolves, 16-17 at the time, had their best chance to make themselves a real player in the playoff push. The schedule looked like this:

Philadelphia, Phoenix, Charlotte, San Antonio, Sacramento, Toronto, Utah, Utah. Based on the way the season ended, going 5-3 would have been expected, but 1 extra win in there was plausible. The Wolves went 4-4, making zero ground in the push.

Obviously, a few more stabs at those lowly Eastern Conference squads would have likely resulted in less split series, but it's tough to look away from the numbers.

Corey Brewer smiles, no matter what. He has a goat, hustles his ass off, and had a 51-point game this year.

Seriously, how nuts was this game?

"I don't think I can call Kevin Love a superstar until he gets his team to the playoffs. His supporting cast this year isn't that bad."

This number, of course, also shows off the fact that Rick Adelman was playing Kevin Love a lot of minutes, at times more than he would have preferred, but had to out of necessity.

Anyone who watched the Wolves this year could tell that the Wolves would look lost without Love, especially in the absence of Nikola Pekovic and Kevin Martin. Any time that happened, and Love needed to take a breather, odds are there was at least one casual spectator sarcastically mocking the odds of a Barea/Budinger/Mbah a Moute/Cunningham/Turiaf lineup, and how it was going to score.

When it comes to blaming the Wolves' best player, one thing you can point to is his free throw shooting late in close games. As pointed out by Zach Lowe in yet another gem of an article a few days ago, he pointed out that Love was 8-16 from the line this year in late-game situations, and just 1-6 in the last minute. That number got even worse after the home finale against Utah.

Still, you can't blame Love for this year. Whether it's because he became the first player in NBA history to record 2,000 points, 900 rebounds and 100 three-pointers in a season, or because he now hustles back on defense just about every time (he used opt to stay on the other end and argue with the officials instead), or because he finished in the top 5 in points and rebounds yet again, you're right.

One thing mentioned earlier was Kevin Love's minutes, and how often he had to be brought back in, or kept in a game out of sheer necessity. A lot of the time, this came because the bench (at times the starters as well) did not bring it.

I heard a lot of blame put on J.J. Barea, who certainly did not have his best year. I was very much a critic of his, but also a sympathizer to an extent.

He was asked to come in and be the bench's main shot creator (who else was going to? Cunningham? Budinger? Shved? Dieng?), while simultaneously playing the role of distributor to a group that struggled to score all year. That's a tough job for a guy who is probably best served in the role he played in Dallas, a less-than 20 mpg guy playing WITH a distributor.

After Barea, the Wolves second unit featured disappointing years in Dante Cunningham and Alexey Shved, injuries with Ronny Turiaf, and a pair of (presumably) unprepared rookies in Dieng and Muhammad. This forced Adelman to try to work some magic probably doesn't exist in this universe. He used Pekovic frequently with the bench, and rolled with a "miss and hope Pek grabs the offensive board" strategy for a while, but in games when Pek wasn't available, things would get ugly if someone wasn't hot offensively.

Gorgui Dieng's emergence came at a time when Pekovic was injured, and the Wolves were forced to run with Dieng in the starting lineup. We didn't get to see too much of Dieng as a bench guy, but it's pretty safe to say the bench with an improved Dieng would have helped matters quite a bit. It should be an interesting start to the 2014-15 season, when we see how Pek, Dieng, and Love get their minutes distributed, especially if Dieng is "for real".

I guess what I'm trying to get at is: there probably isn't one thing you can fully pin blame on for this year, but if I had to pick, I would probably blame the erratic bench play. If the alternate 5 stays healthy and produces somewhat consistently, giving the starters adequate rest, maybe the starters' legs are more fresh in the 4th, and maybe the Wolves have a better record in games decided by 4 points or less as a result.

I wouldn't be shocked if a tweak to the bench, which could begin with a good draft pick, gave next year's Wolves a Blazers-like jump. I also wouldn't be shocked to see a new bench with the same results, as it's tough to move the lack of value the Wolves have on their pine for something that could give them the boost they need.

But, that's a lot of "ifs' and  "what ifs", something, as a lifelong Minnesota resident, have learned isn't something to rely on. There are 82 games in a season, and each individual game brought different scenarios and different results. It would be easier to sum things up in an NFL season.

I guess we could just blame Ed Malloy.

Sidenote: I was given the honor and privilege of covering games for Canis Hoopus this year, and it's something I love doing, and want to keep doing. Thanks to everyone involved for giving me the opportunity to do this, and a big thanks to Eric, Key Dae, and Seth Pollack for making the transition so smooth for me.