A few hours ago, Marc Stein of ESPN alerted the masses about a development in the Kevin Love situation.

Obviously, trading Love to the Golden State Warriors must involve Klay Thompson, Wolves fans have known this all along. Still, by not promoting Klay Thompson as an available asset, the Warriors front-office sustained leverage in negotiations-- until today.

About an hour after the Stein tweet, Chris Broussard's infamous sources alluded this potential trade as a possibility.

I believe I speak for everyone: Hell no.

Can't see a scenario where Flip parts with 13th pick and Love in a GSW package. Think we're still in early stages of bargaining

So, where do we stand now?

If these sources are correct, Flip Saunders now has a starting point to negotiate a potential deal with the Warriors. This is a result of the vast array of rumors that have surfaced since Love began forcing his way out of Minnesota by way of national television appearances and vacations to other NBA cities. Note - Kyle alluded to the plethora of rumors from yesterday in his post earlier this morning. It's no accident that after it was reported that Saunders believed he wouldn't receive a better deal than what the Boston Celtics have to offer, which would be packages that include Kelly Olynyk and/or Jared Sullinger paired with 2014 and future draft selections, that the Warriors would publicly make Thompson available.

Marcus Thompson, an excellent Warriors beat, weighed in with his insight by stating; "Warriors management still does not want to include Thompson in the deal. But they are not ready to exit the Kevin Love sweepstakes by refusing to include Thompson. Per one source, the inclusion of Thompson was a counter offer from Minnesota - and the Warriors haven't responded yet."

[Klay] Thompson's father, Mychal, a former Minnesota Golden Gopher, told ESPNLA 710-AM that, if the trade does happen he'll need to "talk his son down from the ledge." This according to Andy Greder of the Pioneer Press. [Mychal] Thompson also states that the trade "sounds like it's going to happen" from the inside information he obtained.

Just over 24 hours after Flip Saunders proclaimed he didn't believe a trade with anyone outside of the Celtics would amount to adequate value, Golden State made Klay Thompson an available centerpiece in a trade for Kevin Love. The NBA Draft is exactly one week away, and Love's value is rising with each minute that passes. Henceforth; leverage in any trade negotiations is slightly becoming more balanced in the Wolves favor.

Still, Saunders does not hold a majority of the negotiating power in discussions with any team.

The primary concern with the aforementioned scenario with the Warriors: Is Thompson a viable centerpiece, and if the Wolves did acquire the 24-year old shooting guard would Saunders be receiving the most value in exchange for a rare, prized asset that only comes around every-so-often.

.@SmoothsHoops Here's a comparative table showing his ratings. Klay is slightly below average for his position. pic.twitter.com/KmqWFxl015 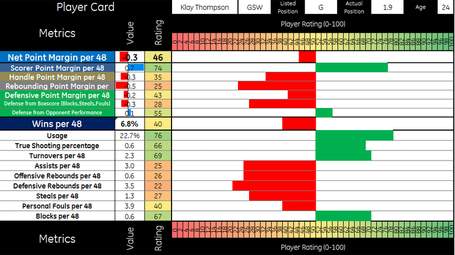 As @ESPNSteinLine reports, Klay Thompson on table (w/Lee) as part of GState offer for Love. I expect Wolves to press for third piece.