According to Alex Kennedy of Basketball Insiders, it is believed that the Minnesota Timberwolves have agreed to select Zach LaVine with the 13th selection in tomorrow's NBA Draft. Also, according to Woj, Kevin Love doesn't like the idea of playing in Cleveland for longer than one year.

NBA draft rumor: Multiple league sources believe that Zach LaVine has a promise from the Minnesota Timberwolves at No. 13.

Quickly: Yahoo's Adrian Wojnarowski was at it again earlier today, reporting a deal between the Minnesota Timberwolves and the Cleveland Cavaliers has sputtered because Kevin Love's agent, Jeff Schwartz, told the Cavs that Love would not sign a contract extension if he were traded there.

"[Saunders] has put it in neutral," according to an anonymous NBA General Manager cited in Wojnarowski's column.

As for the tweet, it is believe the Timberwolves will select Zach LaVine if he is available when they go on the clock at 13. LaVine is 19 years old, 6'6'' and 181 pounds. He's that dude who impressed the internet with his leaps not too long ago [see below]. 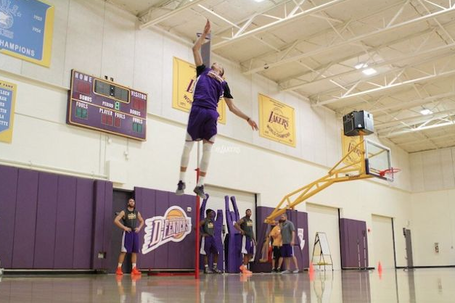 I have no idea why this is happening.

This rumor is all very timely, as tomorrow night the NBA Draft finally takes place. There's been plenty of analysis and mockery covering the incoming prospects, and numerous predictions about where each player will land when this thing is all said and done. DraftExpress has LaVine going to the Wolves at 13, but that wasn't the case yesterday. SB Nation's Magic blog, Orlando Pinstriped Post, has LaVine 13th on their community draft board. But, only Matt Moore has LaVine selected in the top 13 in this CBS mock draft that included Zach Harper [you probably know that guy] and Gary Parrish.

Vjl110's data lists LaVine below 14 other players, and Key Dae's post from earlier describes the high-flying, former UCLA Bruin as someone who isn't ready for the NBA-- yet.

I see LaVine as a risk. I don't believe the Wolves would select him at 13 if he is available. He doesn't seem to embody the type of player Flip Saunders and Milt Newton would take, as they've mentioned on numerous occasions that they would like to draft a two-way player-- someone that can immediately contribute on both ends of the floor, next season.