Optimism and Pessimism on Timberwolves Draft

vjl110 considers the pros and cons of Zach LaVine and Glenn Robinson III.

Share All sharing options for: Optimism and Pessimism on Timberwolves Draft 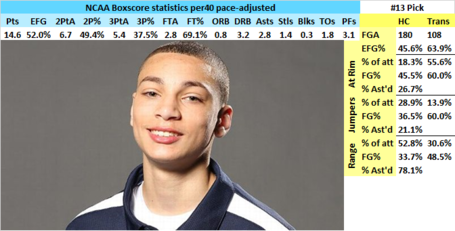 1) LaVine has a clear-cut position and his skillset and physical attributes all fit perfectly with the prototypical shooting-guard.  This is a major plus given the weakness of the 2-guard position across the league.  This means that the standard is not as high for LaVine as it is for smaller guards or front-court players.

2) LaVine is extremely athletic.  He will immediately be one of the fastest and jumpiest players in the NBA.  I listed LaVine's no-step vertical measure above because that is a better indicator of useful athleticism, but his max vertical of 41.5' at the combine and supposed measure of 46' during workouts have received a lot of attention.

Athleticism is the reason LaVine has been lauded for his "potential."  I have made my opinion on this naïve approach to understanding expected growth curves clear in the past (link), but there is something to it.  Athleticism helps us understand which players are more likely to become star players and in that sense LaVine really does have some untapped potential.  I try to capture this in my star% model, and because of this LaVine looks like a much better pick using that model than he does looking only at production.

3) One indicator of potential that nobody should question at this point is youth.  LaVine has that.  He was the fourth youngest collegiate prospect taken in the draft and that means he really does have a chance to grow into a better basketball player.  LaVine is not going to be a useful contributor next season, but hopefully it will be fun to watch his progress.

Ignoring "potential" and just looking at actual on-court play it is difficult to think of a recent lottery pick who had a less impressive season.  Zach LaVine was the 5th (maybe 4th) best guard on UCLA'spretty good college basketball team.  Three of the guys ahead of him were also underclassmen and two of them were also drafted in the 1st round last night.  Not only that, but for all of LaVine's "potential", if anything he actually got worse throughout the season.  He turned some heads early against over-matched competition, but was often completely invisible by the NCAA tournament.

LaVine has two key flaws.  The first is that he was the worst guard prospect in the draft at attacking against a set defense.  His 1.5 attempts at the rim every 40 minutes are very low, and even when he got there he only converted at a terrible 46% rate.  This inability to get to the rim is also captured in his lowly 2.8 free-throw attempts per 40, a rate that is outlier low among fellow guard prospects.  I worry whether we should care about LaVine's athleticism if he can only get himself to the rim when there is nobody in front of him.

Perhaps related to LaVine's limitations attacking the basket, he was an absolutely abysmal decision-maker.  I made it clear early in the draft process that LaVine was the player I least wanted us to draft.  This was in part due to his lack of production, but mostly I just find him very difficult to watch.  He constantly had me shaking my head and yelling at the screen.  I can't imagine how this will be when I am actually emotionally invested in his team.  Chucker is probably the best description I can think of for LaVine's offensive persona, but that is not quite right.  Unlike your Nick Young types who just want everything on offense to be about them, it was almost as if LaVine had a randomly set timer in his head and the ball needed to be released towards the basket whenever it went off.  I ascribe most of this to poor understanding of the game, but it may also be that LaVine is so uncomfortable creating offense that he is limited to sporadic frustrated attempts.

Zach LaVine is not particularly good at basketball.  However, he is young and athletic, and possesses the core rudimentary skills (handling and shooting) to potentially develop into an NBA shooting guard, which is a rare commodity.  I am not happy with the pick since there were a number of more exciting prospects available at #13, but I am not without hope for LaVine's prospects.

One interesting story to watch develop is whether General Manager Flip Saunders forces Coach Flip Saunders to play his guy for development minutes in spite of the fact that LaVine will almost certainly not be ready to contribute.

In many ways Glenn Robinson is the small-forward version of LaVine.  GR3 has prototypical size and athleticism for his position and while none of his handling, awareness, and shooting are strengths, he arguably has the foundation to build from.

Unlike LaVine, Robinson uses his freakish vertical leap as it is intended.  He kills the rim attacking off-ball.  Making 78% of attempts at the rim in half-court situations on 4.1 looks every 40 minutes is extremely impressive.  His shot could be better, but he makes enough off-ball jumpers to keep defenses honest.  It will be fun to see what Flip and Rubio do to get Robinson looks cutting to the rim.

While Robinson is not quite as young as LaVine, he is still within his key development years and it is very realistic to expect improvement if he is given a chance to stick with the Wolves.  I really hope he is, since I think despite his middling production he has the combination of skills and physical profile to be more intriguing than our lottery pick.

In spite of his tremendous length and athleticism, Robinson posted very pedestrian defense and rebounding numbers.  His distribution stats are also quite weak and this is consistent with his marginal handles and creative ability.  This is concerning, because there is not much value in an off-ball wing with below-average defense and shooting.  If Robinson develops both of these areas he will be a player.  Otherwise I do not see him leaving the bench in the NBA.

Similar to LaVine, Robinson simply was not dominant in college.  It is not often that a player goes from 2nd/ 3rd fiddle in college to a contributor in the NBA.  I certainly agree that athleticism is a useful predictor of future success, but its siren call consistently maroons GMs who fail to attend to on-court production as well.

Glenn Robinson is a really nice 2nd round pick.  The selection is everything Flip thinks he is doing with the LaVine pick, but at a cost that is consistent with responsible risk/reward management.  In fact, if you take my numbers seriously there is an 11% chance that Robinson becomes a future star and a 36% chance he is good enough to start at the 3.  That is an impressive return for an asset the Timberwolves apparently value just above "cash considerations".

Since LaVine and GR3 both have a remarkably similar combination of EWP and Star%, I looked a the history of wings with this profile in my ratings.  The list is surprisingly solid: 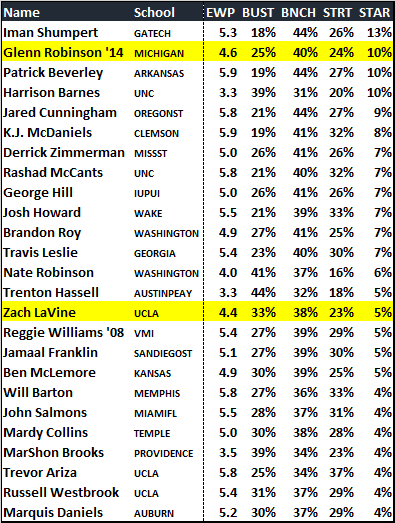 Finally, I wanted to note that I have updated my Draft Cheat Sheet to help identify potential undrafted free-agents.  Here is a link to the spreadsheet.  Drafted players are marked in red, while all of the remaining players are left in black.  The list is sorted by statistical ranking.  I recommend you spend some time looking at these numbers then go to Draftexpress to review their profiles.  This will give you a chance to build excitement for prospects who have about a 0% chance of being invited to the Wolves' Summer League.