Inside the Upside: Glenn Robinson III

Saturday, I profiled Zach LaVine and what his potential upside could bring to the Timberwolves next season. This time, I try to go inside the upside [do you like my branding?] of the 40th overall selection in the 2014 NBA Draft, Glenn Robinson III.

Share All sharing options for: Inside the Upside: Glenn Robinson III

Glenn Robinson III answered questions, Friday, after being introduced aside Zach LaVine as the newest members of the Minnesota Timberwolves. Robinson described the unique part of his game is that he can play multiple positions, and that he will do whatever it takes to win.

Jon Krawczynski of the Associated Press asked Robinson if it was hard to play at the University of Michigan considering the notion it would hurt his draft-stock, as he spent most of last season playing power forward. By the end of the question and answer session with the media, Friday, Robinson had said his true position is at the 3. He's 6'7'', 211 pounds and celebrated his 20th birthday in January.

Robinson started all 76 games in his two-year career at Michigan.

Thursday, Flip Saunders joked as he described the nostalgia induced from sitting next to the Wolves second round selection. Saunders chuckled when telling the media of how he used to gameplan to try and stop Robinson's father, Glenn Sr-- the first overall selection in the 1994 NBA Draft. The reaction was what you'd expect, as it's easy to find someone that's talking about how old they are to be pretty annoying.

A few minutes later, Robinson was asked his thoughts about Zach LaVine. After Robinson was done describing who he thinks is an athletic, skilled, great overall basketball player, LaVine looked over, grinning, and told his new teammate "thanks bro."

The 40th overall selection in the 2014 NBA Draft was the second and only player taken by Minnesota, and Robinson is the less-frowned upon of the two selections.

Dunk contests at TWolves practices are going to be sick with Zach LaVine and Glenn Robinson III trying to one up each other. @APkrawczynski

Robinson is described by DraftExpress as an excellent athlete who can attack the rim and finish over length. They aren't lying, but it's almost impossible to grade Robinson based on the site's highlight video because he's mostly just catching wide-open allyoops in transition. Still, that alone is an area where he could make an instant impact playing for the Timberwolves.

The Wolves connected on 30 of 43 alley-oop opportunities last season, which placed among the bottom 10 of all NBA teams-- dunks and layups completed after receiving a pass mid-air were both considered qualifying opportunities. 12 teams converted more than 50 alley-oop attempts and four of those 12 produced over 100 alley-oops during the 2013-2014 season.

Of the 8768 points the Wolves scored this season, 60 of them were manufactured by an alley-oop. That's less than one percent of the overall scoring output. The Los Angeles Clippers, whose 372 points on alley-oops led the league, only scored four percent of their points this season in these situations.

While the alley-oop is an exciting play, it is not necessarily a productive play. Robinson's ability to finish alley-oops isn't going to be impactful in manufacturing points, but it can help the Wolves become more efficient on the fast break.

The Clippers [186], Houston Rockets [125], Denver Nuggets [100], Detroit Pistons [100], Golden State Warriors [68], Oklahoma City Thunder [64] account for six of the top ten 10 in alley-oops made last season. Each team also ranked in the top 10 in fast break points per possession. The same is true for fast break points per game.

As VGL put it the other day, Robinson kills the rim attacking off-ball. Making 78% of attempts at the rim in half-court situations on 4.1 looks every 40 minutes is extremely impressive. His shot could be better, but he makes enough off-ball jumpers to keep defenses honest. It will be fun to see what Flip and Rubio do to get Robinson looks cutting to the rim.

Robinson is not only efficient in transition, but as the table above shows, he can also effectively find other ways to score in the half court. Basically, Robison statistically embodies the projected upside of Shabazz Muhammad, and, as vjl states, in many ways Glenn Robinson is the small-forward version of Zach LaVine.

Moving without the ball, much like Corey Brewer's role in Rick Adelman's halfcourt offense last season is a facet of Robinson's game that seemingly will translate well when becoming integrated within the Wolves offensive philosophy. Robinson is two-inches shorter and 20 points heavier than Brewer, and both players cut sharply, and in similar ways off-ball.

A comprehensive report of Robinson's scoring distribution and shooting efficiency can be found by clicking this link, but here are some more intriguing visualizations I pulled from the study [in addition to the table above].

If Robinson isn't using his cutting ability and strength to find and finish attempts around the rim, the shot chart and graphic below reflect his liking for elbow jumpers, as well as the corner-three point shot. Entering the 2014 NCAA Tournament, Robinson had made 44 percent of mid-range field goal attempts taken from outside the painted area-- the third highest percentage among Big10 players with at least 40 qualified attempts. 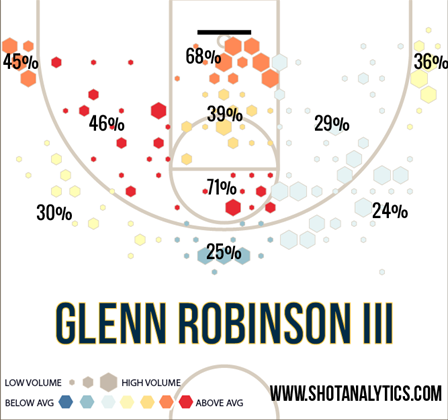 In addition to the ranging set of offensive skills, Robinson's lateral movement and thick, strong frame and lengthy wingspan [6'9'' long] are attributes that embody a two-way type of player Flip Saunders and Milt Newton spoke, enamored over after going through a rigorous, scouting process before the draft.

In his second season at the University of Michigan, Robinson showcased his awareness and experience on the defensive side of the floor by getting into the passing lanes-- last year, he averaged 1.2 steals per 40 minutes. Robinson can disrupt shooters and ball handlers, but also moves well enough to stay in front of smaller, quicker wing players and even shooting guards.

His awareness, ability to play within limitations while understanding how to utilize physicality and strength will be characteristics to keep an eye on as Robinson's development progresses. As a 20 year old, it's understandable if some of these intangibles take time to sharpen before Robinson is ready for deployment as a rotational player.

In the closing minutes of Friday's press conference introducing the newest members of the Timberwolves, Flip Saunders was asked about the two, second round selections that were sold in exchange for cash. "We just felt there wasn't anybody there," he replied, "Last year we took Lorenzo Brown. He was a good player, but our roster was full and we had to release him." Saunders referred to the criticisms made after selling the late, second round draft selections as a lighting rod, subsequent bashing from the media spearheaded by Jerry Zgoda [Flip cited Zgoda by name] was without warrant because the roster is currently pressed against the salary cap.

Kevin Love's value as a trade-asset had arguably reached it's peak on draft night, yet he remains on the team despite the abundance of rumors that imply his departure from Minnesota his imminent. For someone who is believed to be searching for a deal that would retain some-sort of value in exchange for a top-10 player, Saunders sure makes it sound like the current group is pretty set-in-stone and hints at no changes being made going forward.

Later, nearing the end of the presser, someone asked Robinson and LaVine which player on the roster they were most-excited to play with. Both of them answered Ricky Rubio, and shortly thereafter another Q & A session was over without a single mention of Kevin Love. If only for a few minutes seconds, fans were able forget about the drama as the the young, youthful spirit illuminated brightly from the the faces of the Wolves 19 and 20 year old rookies as neither referenced the best player on the current roster-- the type that only comes around every so often, someone who you can't afford to watch walk away in exchange for nothing in return.