Kevin Garnett expected to return for his 20th NBA season

According to Nets GM Billy King, Kevin Garnett is expected to return for his 20th (and likely final) season. He played his first 12 seasons in Minnesota, and has cemented a legacy in the process.

Share All sharing options for: Kevin Garnett expected to return for his 20th NBA season

I grew up with Kevin Garnett.

Not literally, of course, but I was 4 years old when the 19-year-old skinny kid out of Farragut Academy in Chicago was drafted 5th overall by the Minnesota Timberwolves. While I was in my own little world, busy getting acquainted with life, my dad was watching the Wolves draft a youngster who had a lot of learning of his own ahead of him.

(Fun fact: my dad wanted Ed O'Bannon that year, and was as furious about the Garnett pick as he was about the Mayo-Love trade)

Garnett was the first high school player drafted into the NBA in 20 years. He was a kid with a lot to learn, but to his credit, was also known for being sponge-like in picking up good hoops habits. It only took him half a year to become the definite face of the Wolves (my dad cites a game against Houston his rookie year that was his unofficial breakout party).

From there on out, Garnett was the face of the Wolves. He led the Wolves to the playoffs every year for 8 straight years. They didn't generally do well once they got to the playoffs, but KG's presence always left a glimmer of hope for the following year. It was always fun to go to a Timberwolves game at the Target Center.

Whether it was running the break with Steph and Googs, kicking it out to an open Wally, or the hand-off/screen/elbow jumper combo with Cassell (and Sprewell), it was always a good time. Lots of kids have sports heroes growing up, and KG was mine.

In addition, there's no part of my childhood I can remember without Garnett's indirect presence and influence. As a result, his departure in 2007 was especially tough for me, and other Wolves fans that only knew Minnesota basketball that included Kevin Garnett. 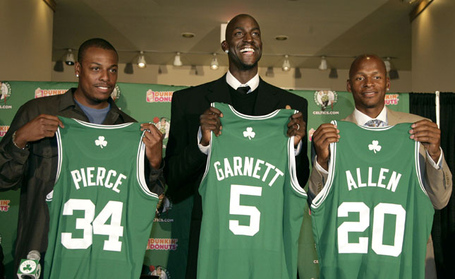 "Why is he so happy? Does he know how conflicted with happiness and sadness I am right now?"

I was definitely conflicted.

A lot of thoughts went through my head while watching that press conference. I think I even dropped a couple four-letter bombs that my dad hadn't yet heard me say out loud.

I was thrilled to see Garnett in a situation where he could not only seriously compete for an NBA title, but do so as the team's best player. With Pierce and Allen at his side, he was positioned perfectly (if executed properly) to serve as the team's defensive anchor and most versatile offensive threat (again, this team had Paul Pierce and Ray Allen).

I was also furious. The man I had grown to idolize since I was 5 years old was no longer on my favorite team. He no longer lived in my home state. He had changed his jersey number, a number I vigorously tried to get every year in my youth basketball league.

It was a weird feeling. I had never met the dude, yet his departure from Minnesota gave me such profound emotion that I hadn't really felt prior, and probably won't ever feel again.

I watched this game at my best friend's (a fellow KG fan) house. We joked and laughed throughout the game, including the post-game interviews.

By the time the 2007-08 playoffs had begun, I was done being sad. The Wolves had a good young stud in Al Jefferson, and the Wolves' future seemed to have at least one piece in place (that's for another time, however). Kevin Garnett's Celtics had some of the stingiest defense the league had seen in a long time. He, Pierce and Allen were clearly all on the tail ends of their prime, but still had plenty in the tank to get it, entirely done.

And while I may have been joking and laughing as if the title clincher was just another game, I knew it really wasn't. I was ecstatic that my favorite athlete had finally gotten his ring, that he had dedicated it to the folks in Minnesota, and that he was celebrating with that emotion that made everyone fall in love with his on-court persona in the first place.

Following the debut season of the Three Amigos, the Celtics made a couple valiant efforts at a ring, including a fantstic 7-game bout with the Los Angeles Lakers in 2009. Ultimately, they were never able to win title number 2.

Then, suddenly, Doc Rivers was Clipper-bound, and the Celtics' two best players were gone. 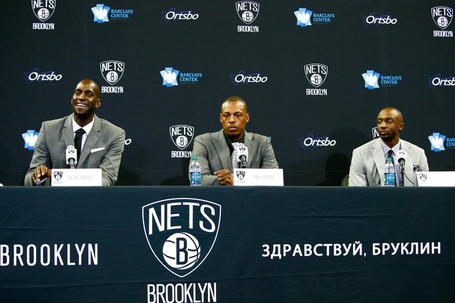 "Man, Pierce and JET sure do look unhappy in that photo"

Seeing Garnett get traded from Minnesota was a weird feeling. If anything, it set me up for what Celtics fans probably felt when they saw Paul Pierce leave the only place he had ever called home in the NBA. Maybe it gave him the preparation for a change that Pierce wasn't ready for.

Most saw the new-look Nets as the biggest competition for the two-time defending champion Miami Heat. Who better to get Deron Williams back on track than Jason Kidd and Paul Pierce? Who better to toughen up Brook Lopez than Kevin Garnett (and Reggie Evans)?

Others predicted what ended up actually happening. A combination of injuries, age, and Jason Kidd's inexperience as a head coach were apparent, and they made for an absurdly bumpy 2013-14 regular season. Instead of finishing with a top 3 seed and the reputation of a contender, they looked brittle, old, and finished 44-38 and a 5-seed in the playoffs.

(Note: It wouldn't be fair to omit that they looked much, much better towards the end of the year than they did in the beginning)

Among the problems was Kevin Garnett's health. Garnett missed the most games of his career (54), to go along with a career low in minutes per game (20.5). His TS%, his WS%, his PER along with a slew of other per-game numbers hit career lows. Part of that had to do with Jason Kidd's offense. Garnett may be older and less useful, but he could have been used more in offensive schemes than he was. A lot more.

The Nets didn't have the season they wanted, and neither did Garnett. Now, it sounds as though he's coming back for what will likely be his last year as a professional basketball player.

On June 25, ESPN reported Garnett would be back, which included some positivity from GM Billy King.

All indications are that Kevin Garnett is preparing to return for another season with the Brooklyn Nets, according to a league source. Barring something unforeseen or a change of heart, Garnett has indicated he will begin preparing shortly for his 20th season. General manager Billy King reiterated on Wednesday that the Nets have been operating as if Garnett is under contract and will play next season until told otherwise.

King said he has been in touch with Garnett and added that he is optimistic about having the big man back and that the 38-year-old will begin training soon. "Yes," King said when asked if he believes Garnett will be able to play at a high level next season. "I think he's preparing earlier this year than he did last summer."

Clearly, that isn't fully definitive. Still, most believe he has one rea$on in particular, more than anything, to come back. Despite only playing 20 minutes per game, Garnett made about $12 million last year. If/when he does come back, he'll make that same figure.

But there has to be more to it than that. As I've followed Garnett's career over the last 19 years, the passion has hardly gone away. No, he isn't the youthful jumpy jackrabbit that he was in his early 20s, but it clearly never left him completely (See: video above. He clearly loves winning). He's also a crazy competitor, and the idea of the 2013-14 season being his last couldn't have sat well with him. It's not surprising that he's returning.

As a Wolves fan, the idea of him return is as relieving as it is saddening.

At one point in my life, I couldn't imagine a world where Kevin Garnett wasn't a member of the Minnesota Timberwolves. In the present, KG will either be entering his final season in the NBA, or just completed his final season. Even in a world where he isn't the dominant player he once was, there's undoubtedly a sense of normal I feel with Garnett in the league.

The league I grew up on featured Jordan on his second stint with the Bulls, Shaq, Iverson, Kidd, (eventually) McGrady, Webber, and a young Kevin Garnett. After KG retires, Duncan and Kobe (and Dirk to an extent) are really the only ones left linking me to that part of my childhood. It would be weird looking at highlight videos as nothing else but a reminder of a dude that used to play in the league.

At the same time, if his 2014-15 turns out to be anything like his 2013-14 season, is it worth it? With new head coach Lionel Hollins at the helm, that remains to be seen. Odds are good that his minutes won't change too much. He just doesn't have it in him to play 25-30 minutes per game anymore, unless the Nets want him burned out at the halfway mark of the season.

It's safe to bet on KG to come back and contribute more than he did last year. Not just because he'll be healthier, but because of who he is as a person. Still, seeing a shell of what he used to be on the floor isn't always an easy thing to watch, especially for those who grew up watching him in this area.

It's looking like, ultimately, he'll come back for another year. You can't really blame him for that, nor could you blame him if he decided to hang up with sneakers and call it a career. Neither will tarnish his legacy, especially to those in Minnesota and Boston.