Kevin Love will not play for Team USA in the World Cup. The Lynx play at 2:00 PM. Maya Moore is a really good basketball player.

We recently entered a holding pattern after the Cleveland Cavaliers signed Andrew Wiggins, preventing him from being traded for at least another 30 days. At this point, it is believed the Cavaliers are the team most likely to deal for Minnesota Timberwolves' forward Kevin Love and Wiggins being unavailable until August 23rd lightens the rampant amounts of insufferable trade discussions and speculation.

Andrew Wiggins and the power of potential

Still, Saturday, Love made his way onto the national headlines.

"The fact is we can only look to the players we have available. Our job is to get the job done with our very, very deep roster, and we're anxious to get things started," said Colangelo.

Love is certainly going to be under an unusual amount of pressure regardless of which NBA team he plays for during the 2014-2015 season. It would be risking injury, participating in international competition before entering the fifth and final year of his contract with the Timberwolves, henceforth it wouldn't be in Love's best interest to represent his country in the upcoming FIBA World Cup.

Team USA is scheduled to meet in Las Vegas on July 28th [tomorrow] where they'll conduct a training camp in preparation for the World Cup taking place in Spain this August. DeMarcus Cousins, Stephen Curry, Anthony Davis, and Kevin Durant are just some of the names expected to meet in Las Vegas, and they'll be coached by Mike Krzyzewski-- Jim Boeheim, Tom Thibodeau and New Orleans Pelicans head coach Monty Williams are the assistant coaches. 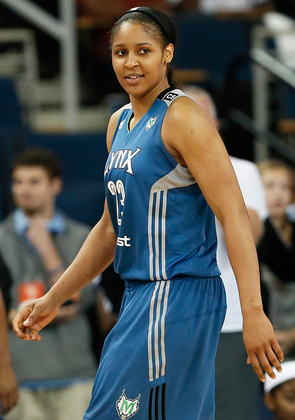 The Minnesota Lynx are on the road trying to prevent the Connecticut Sun from surpassing their win total from all of last year. Tip-off is scheduled for 2:00 PM [Central Time], and you can listen to the radio call on 106.1 FM [Twin Cities].

The Sun must win only one more game in order to do that, but they're going to have a tough time doing that against the Lynx. Receiving more national attention than usual, Maya Moore has been unreal lately. She has scored 30 points or more in 10 different games this season, including a franchise-record 48 point performance last Tuesday.

I think that a woman will play in the NBA in my lifetime.

Moore is averaging 25 points, eight rebounds and three-and-a-half assists while shooting nearly 49 percent from the field, this season. The Lynx won their sixth consecutive game on Friday, after Seimone Augustus returned from an eight-game absence to score a game high 17 points against the San Antonio Stars.

Augustus described her absence as the most frustrating period of her eight-year career.