Kevin Love, Andrew Wiggins and their roles in the defeatist narrative tied to professional sports in Minnesota.

There's an undeniable stigma tied to the professional sports organizations in Minnesota.

(Excluding the Lynx, of course)

Yesterday, over at Fox Sports North, Phil Ervin told the story most Minnesota Timberwolves' fans know all too well.

The Kevin Love era started with hope, ending in discontent

Ervin categorizes Love amidst Randy Moss, David Ortiz, Johan Santana, Torii Hunter, Marian Gaborik and "another tall, game-changing Kevin that called the Target Center home for years"-- Kevin Garnett. These athletes all came to Minnesota as unknowns before becoming nationally renowned as perennial superstars, respectively, but each would ultimately leave seeking to fulfill their championship aspirations elsewhere. Although, Love's saga ends notably different than the that of the others. Fans never fully embraced, nor did they appreciate Love-- some say this is because he simply wasn't Garnett.

As Steve McPherson wrote back in May; "Garnett wanted the work, wanted the weight. 'Jump on,' the spot seemed to say. "We're going there together." Whereas Love simply wasn't, and isn't, a leader. Some would say that's what his team so desperately needed last season, as the Timberwolves faltered in numerous tightly-fought games subsequently leaving them on the outside looking into the postseason for the 10th consecutive year.

Love has never engendered the same kind of confidence. It's not just because of the Wolves' inability to get into the playoffs during Love's first six years in the league, although that's part of it for some. For all his immense and indisputable talent, for all his record-setting performances, for all his expressed desire to be the kind of leader the Wolves have needed during his time with the team, Love is simply not a guy to carry a team and its city on his back. - McPherson

Although fans witnessed one of the NBA's most unique talents of the past decade, many are willing to forgo his presence because Love's demeanor reflects poorly on the Wolves' as an entity. His behavior --albeit it is considered to be warranted-- attributes to the ignominy that will be tied to future athletes who come to Minnesota as the newest members of the Vikings, Wild, Twins or Timberwolves. Moreover, unlike when Garnett left, there are few who are somber in the wake of Love's departure.

As Eric illuminated yesterday, Bill Self, Wiggins' coach at Kansas University, described the events that have occurred this summer as overblown. "I think the whole thing that's been blown out of proportion a bit is that he's been in limbo. He's known since the summer that he'd be traded. It's OK. In some ways he's looking forward to going to Minnesota."

Chris Johnson of Sports Illustrated projected offseason grades for teams in the NBA's Northwest Division, yesterday, where Flip Saunders and the Minnesota Timberwolves a B-.

Johnson makes the assessment assuming Love will be traded to the Cleveland Cavaliers in exchange for Andrew Wiggins, Thaddeus Young and a 2015 first round draft selection. Although, it is stated that terms of the deal are not finalized.

Wiggins, the reported centerpiece of the trade, has been lauded as one of the best prospects of the past decade. There was a strong argument to be made that Cleveland should have kept the Kansas product. And in Young, who averaged 17.9 points and 6 rebounds per game with Philly last season, Minnesota gets a proven forward capable of helping replace some of Love's production. But is that what the Wolves should be trying to do? Young, 26, can opt out next summer and might not be long for Minnesota. Does he make more sense than the other player initially reported in the deal, 2013 No. 1 pick Anthony Bennett, whose development seems more aligned with Minnesota's projected timeline for contention? Perhaps an unexpected run at the postseason can convince Young to commit to Minnesota long term. The Timberwolves reportedly could receive a top-10 protected, 2015 first-round pick via Miami (if it's not dealt to the 76ers for Young), a hedge against possibility of losing their own 2015 first-rounder as part of the 2012 Wes Johnson trade.

With Wiggins and this year's first-round pick, the freakishly athletic Zach LaVine, Minnesota can turn the page and chart a new course, with a new core. This was never going to be a "great" offseason for the Timberwolves, but in the final analysis, it's hard to find fault with their plan.

What once was an abysmal, awkward and situation has become an opportunity for the Timberwolves to start over again. It's another era inspired by hope and potential. This time, with someone who will embrace the challenge that is playing sports in Minnesota. Fans seem to be excited about their team again, but it would be impossible to ignore the ever present defeatist narrative that will be tied to Wiggins, Rubio and LaVine, if the Wolves are to fumble yet another opportunity at constructing a respectable NBA team.

As most of you may know, a tragedy occurred yesterday. Actor and comedian Robin Williams was discovered at the residence he shared with his wife in Tiburon, California, on Monday. According to the Marin County Sheriff's Office. He had last been seen alive Sunday at 10 p.m., according to this report by NBC.

"This morning, I lost my husband and my best friend, while the world lost one of its most beloved artists and beautiful human beings," his wife, Susan Schneider, said in a statement. "I am utterly heartbroken. As he is remembered, it is our hope the focus will not be on Robin's death, but on the countless moments of joy and laughter he gave to millions."

I'll leave you with a picture, and a scene from the movie Good Will Hunting. 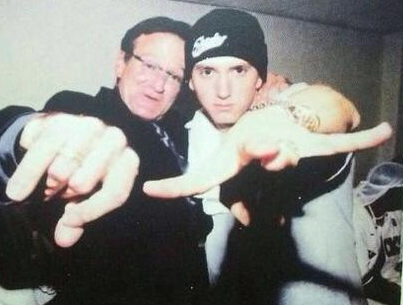