Yesterday, the NBA release the 2014-2015 schedule. Here's some detailed information pertaining to the Wolves' schedule. Also: Some stuff I found in few academic studies, which discuss the benefits and caveats playing consecutive games on the road, as well as at home, for you to muse on this Thursday morning.

As you likely know, the NBA released the 2014-2015 schedule yesterday. The Minnesota Timberwolves open on the road against the Grizzlies on Wednesday, October 29th. The most anticipated game of the season takes place January 31st, when the Cleveland Cavaliers come to town-- Kevin Love's return to Target Center. The Wolves will play the Cavs in Cleveland on December 23rd.

The Los Angeles Lakers will play 16 back-to-back games, less than any other NBA team, while the Detroit Pistons and Charlotte Hornets are scheduled for 22 matchups to be played under these circumstances. As for the Wolves, they're one of seven teams that will play 19 back-to-backs. The table below reflects how many NBA teams will play a particular number of back-to-back games.

The schedule bestows the Timberwolves with some theoretical advantages. They will have had two nights of rest before playing in 10 of their 41 road games. Only the Chicago Bulls (11) will play more games on the road with two days rest. There will be 25 instances in which the Wolves opponents are in the midst of back-to-back games. Only the Utah Jazz, Miami Heat, and Milwaukee Bucks are scheduled more of these scenarios.

Although, Minnesota will likely be among the teams that travel the most throughout the year. Last season, Matt D'anna and I tinkered around by coming up with ways that would reconfigure the NBA by abolishing divisions. While researching, we determined 'Estimated Season Distance' (ESD) is the Arena-to-Arena distance for every team in the league. ESD is not the actual distance travelled for each team in a season; rather, it is a metric representing the distance a team travels from game to game, relative to the rest of the league.

ESD assumes travel to each away game begins at the team's home arena. The following graph reflects an estimated distance each team will travel, and was calculated prior to the schedule that was released yesterday by the NBA. It is not a completely accurate representation of the miles each team will travel this season, but its probably close. 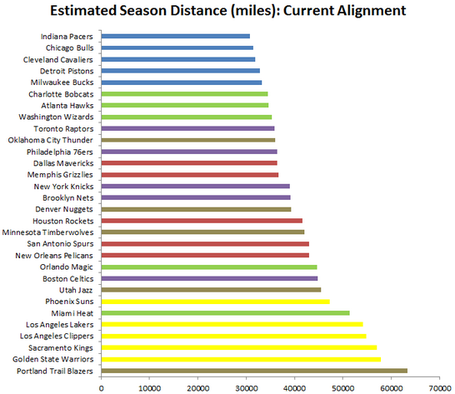 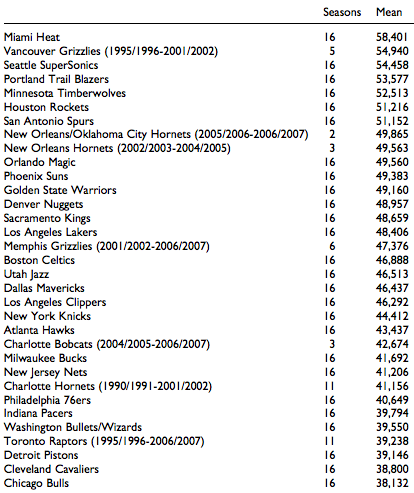 As far as homestand and road trips, the Wolves will play no more than four-consecutive home or road games this season.

'The wages of wins: Taking measure of the many myths in modern sport,' uses academic research to try and debunk many of the most commonly held beliefs about sports. Specifically, the study examines within-season, immediate changes in workforce productivity-- the 'workforce' being NBA teams and players. The results within the book indicate that the more days off between games played during a homestand is more likely to decrease, defensive productivity. Moreover, the more consecutive road games played in succession -- with less days off between road games -- is actually less detrimental to a traveling team's productivity on the defensive end.

A study by Andrew Nutting within the Journal of Sports Economics finds that home teams see worsened defense and win production the more consecutive days spent at home. Nutting's research also indicates that road trips, although travel may, theoretically, result in fatigue; road trip length does not significantly affect a traveling teams' win or defensive production.

Simply; while home stands should result in success, there are also caveats to playing consecutive games at home-- defensive production is likely to decrease if there are more days off between matchups. While in the case of road trips; playing in back-to-backs whilst away from home will actually increase win and defensive production for the team that is traveling.

Here's a link to the Wolves' complete schedule.