Musings: Is Ricky Rubio ready to become the Minnesota Timberwolves' vocal leader? The Fort Wayne Mad Ants of the D-League are hosting an open tryout in Minneapolis, will you go? Could you make the team?

In 2012, David Aldridge wrote this column stating Ricky Rubio's game is translating to the NBA just fine. He alluded to the fact Rubio was slowly growing accustomed to handling media-situations a future NBA star has to deal with on a regular basis.

"It's hard sometimes," Rubio said. "Because when everybody's talking about you, if you do something good, they're talking good. If you do something bad, they talk worse, you know. So it's hard. You have to know that when they talk good, they're gonna talk bad when you do the bad things. So you (don't) have to listen to them. Just play what you love. It's basketball. And forget about everything. Just enjoy when you're in the court and don't think (about) anything else."

Admittedly -- having not spent much time in the Timberwolves' locker room last season -- I'm unable to comment on Rubio's demeanor presented during post-game interviews and other, similar situations. Although, after reading this column published yesterday, it shouldn't surprise anyone when Steve McPherson states Rubio conformed to Kevin Love's approach when speaking with the press. Postgame situations -- especially after losses -- are remarkably tense, and Love's frustration as a top-10 player who has yet to play in a playoff game can be easily provoked. This proverbial pressure chamber occasionally combusts, resulting in awkward situations such as the one below.

"Kevin Love is a special player. I mean, his stats are amazing, but maybe the leader has to be someone else. He leads the team with his production, but he may not want to be the vocal leader. There are different kinds of leaders, so maybe we lacked a bit of that, a commanding leader and voice within the locker room. Maybe Kevin Martin should have been that person -- someone with more experience -- or maybe I can take a step forward and be the leader once and for all. These things happen in teams so young, we missed that. If you take stats, it's clear Kevin Love is the one who must get the ball at the end."

It's safe to say Rubio will undoubtedly have the opportunity to become the Wolves' vocal leader, now that Love expected to join the Cleveland Cavaliers. Henceforth, no longer should he be perceived as an adorable and fun-loving Spanish Unicorn. Moreover, after reports indicated Rubio will seek a max contract at the end of next year, the time for him to emerge as the face of the Timberwolves' is now. It's safe to assume this is something Rubio will embrace, because the looming uncertainty that once surrounded Love will no longer infects the Target Center and can no longer be a distraction.

Yesterday, we welcomed John Meyer as the newest contributor to CanisHoopus. You can welcome him on Twitter if you'd like, or, if you're looking to see what type of content he'll bring to this webpage, read Rubio and the Wolves Must Save Each Other (Again). It's a relevant article to the 'Will Rubio be a leader' conversation.

So how many Minnesotans are going to attend/tryout for the Fort Wayne Mad Ants Sept 6 @ Target Center?

The Fort Wayne Mad Ants announced yesterday that they will hold open tryouts in Minneapolis for the 2014-15 NBA Development League season. They will take place on Saturday, September 6th from 8:00 a.m. to 12:00 p.m. at the Timberwolves' Practice Facility located at 600 First Avenue North, Minneapolis, Minnesota 55403.

Check-in begins at 7:00 a.m. and the tryout will begin at 8:00am. The Mad Ants local player tryouts offer athletes an opportunity to showcase their talents in front of the Fort Wayne Mad Ants' coaching staff. Players will compete to earn an invitation to the team's training camp, which will begin in early November. If you are interested in trying out, you must submit the official registration and release forms, in addition to a $150 non-refundable fee to the Mad Ants office-- late registration is $200 for all forms received after Thursday, September 4th. Payments must be made by money order or cashier's check.

Registration and release forms will become available on this page by Monday, August 18th. For any questions, please contact Kevin Bloom with the Fort Wayne Mad Ants at 260-469-4667. For more information about the Mad Ants organization, visit www.fortwaynehoops.com. 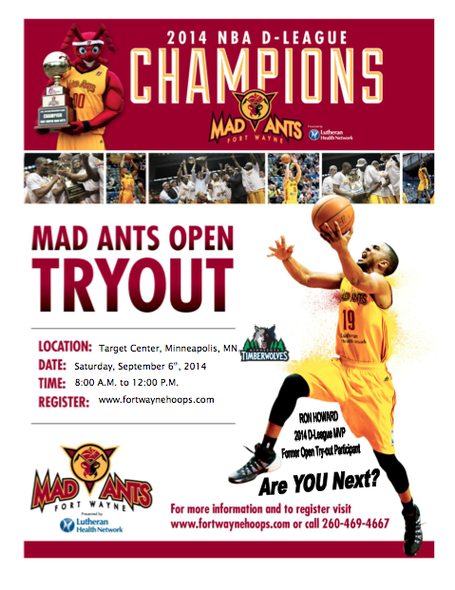