Allow Me To Introduce Myself

My name is John Meyer, not to be confused with the lonely heart of John Mayer. Some of you may know me as thedailywolf, while others may not know me whatsoever. This is my first post, which I hope provides a glimpse into what you can expect this upcoming season.

Share All sharing options for: Allow Me To Introduce Myself

The Wolves also won 50 games for the first time in franchise history that year (50-32). Stop-n-Pop was officially born (also known as Terrell Brandon, but you already knew that), Wally Szcerbiak and William Avery were both rookies about to set course on two extremely different career paths, and Flip Saunders was the coach. I started to hate the Portland Jail Trail Blazers only because they were better, and I began to have opinions. I missed Marbury like crazy, but still had hope for the future - a feeling Wolves fans are all too familiar with. I pulled for former Golden Gopher Bobby Jackson and Malik Sealy was my second favorite player, because 10-year old me recognized that KG really liked him.

That was the season that truly sparked my passion for the team. I've been a hardcore fan ever since, whether it was a 15 win season under Kurt Rambis or a 58 win season and Western Conference Finals appearance under Saunders. Throughout the years, I've loved to read Wolves blogs like Canis Hoopus and A Wolf Among Wolves, as well as tons of other Wolves writers like Britt Robson, Jon Krawczynski, and Jerry Zgoda. They made me feel more knowledgeable about the game and reading their work helped me find my own voice, as well as develop my own opinions and arguments.

My interest in blogging sparked in 2012 when I was extremely bored and looking for a new hobby outside of playing NBA2K in my basement. I arrived at an idea that I'm sure millions of people on this planet have had: "Hey! Maybe I should start a blog." So I did, and that's how The Daily Wolf began. Now I'm excited for the opportunity to come join the wonderful Canis Hoopus community as a writer.

A Little Bit About Me...

Kevin Love has been my favorite NBA player since the night Kevin McHale flipped O.J. Mayo for him and Mike Miller. I remember driving home after the Wolves draft party at the Target Center feeling cautiously optimistic about the USC product, but desperately wanting the UCLA big man instead. I was a freshman at St. John's University in Collegeville, Minnesota when the UCLA team featuring Love and Russell Westbrook became the apple of my college basketball eye. So, when I flipped on my TV after arriving back home, my dreams had come true. The Wolves pulled off a blockbuster draft day trade that I actually felt positive about. K-Love was coming to Minnesota.

Fast forward to present day and Love is still my favorite player, which is certainly an unpopular view around Minneapolis, but his impending departure to Cleveland will almost assuredly change that; the Wolves always come first in my heart (update: Ricky Rubio is now my favorite player). I hope you can all help me move on from Love and on to something much bigger (hopefully Andrew Wiggins).

Aside from blogging about the Wolves, I'm just a 25 year old guy that loves playing fantasy sports, watching movies, listening to all sorts of music, and relaxing with good company.

My favorite non-Wolves players across the Association are Paul George, DeMarcus Cousins, Marc Gasol, DeMar DeRozan, and John Wall. I'm also a big fan of Michael Carter-Williams, mostly because a few of my friends joke that we look similar. So, if you're ever thinking to yourself "Hmm... I wonder what John looks like in person," just close your eyes and imagine a 6 foot white version of MCW with a twist of Zach Braff. That sounds terrible, doesn't it?

Ricky Rubio and the Wolves must save each other again, which I wrote here. I believe that Wiggins can generate a buzz around the Wolves that we haven't seen since Rubio's rookie campaign, reinvigorating a zombie-like home crowd in the process, while being a box office hit. I believe that Wiggins and Rubio will create nightmares for opposing offenses and re-shape the identity of the Timberwolves into a fast-paced, transition oriented, defensive-first team that can get stops to win games, rather than relying on an offense that doesn't possess a proven closer.

I want to believe that Anthony "Big Daddy Canada" Bennett is not the next tweener forward to grace the Target Center hardwood, a la Derrick Williams or Michael Beasley, though I'm unsure if he'll be on the squad to begin with. I believe Zach LaVine can prove my initial draft day reaction wrong - I was all-in on Michigan State's Gary Harris - and flourish in the NBA using his freakish athleticism and shooting ability. Most importantly, LaVine has an undying belief in himself, which sounds a bit odd, but I believe in his self-confidence.

I believe that Nikola Pekovic will collect at least 10 new skulls this upcoming season. I believe this years team will be better than advertised - I mean, the Wolves won 31 games two years ago with this roster, so at the moment I'm not buying the 20-25 win talk - and they will come together under the leadership of Saunders and Rubio to surprise. I believe the Wolves centers may be the best trio in the league, and also the most interesting. And ultimately, I believe in the future of the organization, even if the last decade provides enough reason not to.

I believe in the Dawn of a New Day. 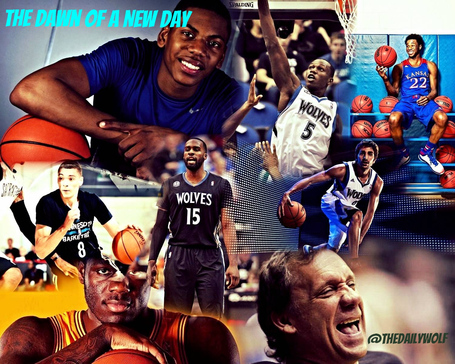 I also believe that John Mayer is a phenomenal musician, even if I've heard that my body is a wonderland in excess of 1000 times throughout my life. Of course, I don't really mind, because I hope to be in position someday to make beautiful music only to leave Katy Perry with the blink of an eye.

Anyway, since music videos are part of many posts here at Canis, here's my favorite song of his (side note: I hope to write a post this season called "Slow Dancing in a Burning Gym" when applicable):

All in all, I'm absolutely thrilled to join the community here and look forward to the next year of Timberwolves basketball, no matter what it may bring.