Around the NBA: Washington Wizards

The Wizards made a surprising playoff run last season. Will they be able to build on their success this year and take the next step to serious contention?

Share All sharing options for: Around the NBA: Washington Wizards

What role should the playoffs play in setting our expectations? Should teams be judged based on their accomplishments in May and June or their accomplishments from November through April? Should a team be expected to replicate or surpass their previous season's playoff record or their regular season record? The Golden State Warriors won 51 games, outscored opponents by nearly five points a game, and lost in seven games in the first round of the playoffs. The previous season's squad won 47 games, outscored opponents by slightly under one point a game, and upset a weaker first round opponent before falling in the second round. Which team should have higher expectations going into the next year? Mark Jackson lost his job in part because of the perception that his team stagnated. Did they actually stagnate or merely get an unlucky draw in April? Should their point differential and regular season success lead to higher expectations for this year's Warriors?

This brings us to the Washington Wizards. In one story, the Wizards were one of last spring's feel good stories, toppling the favored Bulls before pushing the top seeded Pacers to six games. In the process, they established themselves as an up and coming Eastern Conference contender. This year, they are touted as an Eastern Conference Finals contender. In another story, the Wizards were an average team with an easy draw. They won only 44 games, which was good for the 5th seed in a weak Eastern Conference after the Nets tanked the last week of the season. Their SRS, a power ranking that adjusts margin of victory for strength of schedule, was 15th in the league, almost perfectly average. 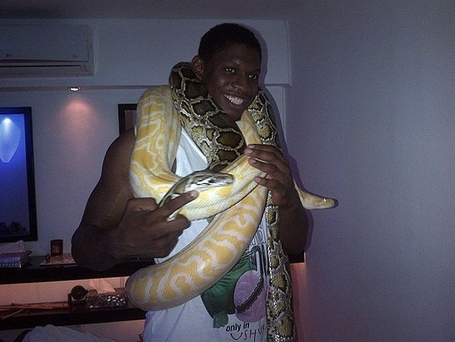 Kevin Seraphin will not be a focus of this preview. To compensate, here is a picture of him with Snakey the Snake

Much of the optimism around the Wizards future comes from the hope that Wall and Beal will continue to improve. Beal is still very young and has flashed an intriguing skill set despite posting mediocre efficiencies (.507 true shooting last year). The team's hope is that natural improvement from their young guards can make them a 50 win team and the front runners to be fodder for the Cleveland LeBrons in the Eastern Conference Finals. The problem for the Wizards is that they may need Wall and Beal to improve merely to tread water. The top of the Eastern Conference still looks weak, although the Lebrons, Bulls, Raptors, and Hawks should all be as good or better than last season. The larger problem is that the rest of the Wizards core is older.

Marcin Gortat is 30 years old and coming off maybe his best season during which he played 81 games and almost 2700 minutes. Nene is 32 and has missed 77 games the past three years. Paul Pierce, who looks to be one of the offseason's biggest steals, will be 37 on opening night and is replacing a player (Trevor Ariza) who logged over 2700 minutes last year. Martell Webster is already injured after playing nearly 2200 minutes last year. Key reserves Andre Miller and Drew Gooden appear to be nearing the end of the line. It is possible that Webster is back in the lineup within a few weeks of Opening Day and the Wizards veterans remain healthy and productive. It is also possible that two or three of these players fall off, lose time to injury, and offset the gains the Wizards receive from another year of experience from Wall and Beal.

If all goes well, Pierce brings added dimensions to the Washington offense. Ariza posted a career year by shooting nearly six threes a game at 40%, but Pierce has been a much better passer and ballhandler over the past couple years. This should take pressure off Wall, who was third in the league in True Usage and was responsible for initiating most Washington possessions, and open up driving lanes for Wall and Beal. Pairing Pierce and Nene at the forward spots will also give the Wizards the benefit of multiple lineups with players who can pass, shoot, and dribble at three or even four positions, which should help upgrade what was the league's 17th ranked offense. 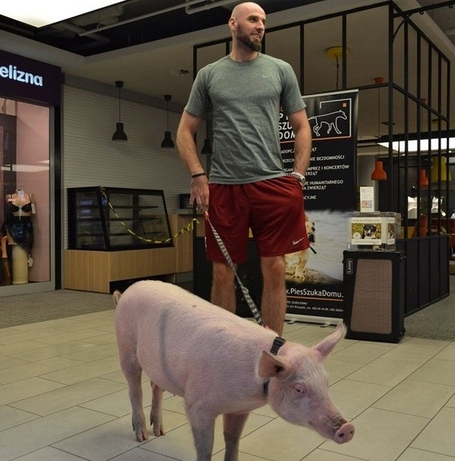 Gortat, a pig, and a mall in Gdansk. He claimed it wasn't his.

One of the keys for Washington is remaining competent on those nights Nene is unable to play. Over the last three seasons, the artist formerly known as Maybyner Rodney Hilario has played 1560, 1659, and 1110 minutes. Nene also participated in the FIBA World Cup this summer, increasing the probability that he'll be nicked up come February. His rebounding and efficiency have also dropped the past two years, his PER was the lowest it has been since 2005, and his adjusted plus-minus numbers dropped from "All-Star" to "above average". He's still an effective player, but he's not the same as when the Wizards acquired him and he has become less important to their team's fortunes than Wall, Gortat, Pierce, and Beal.

Like a healthy cereal, the Wizards fortified their bench to guard against injuries, bringing in DeJuan Blair and Kris Humphries as extra big men. Both are solid bench options, providing efficient scoring and tenacious rebounding. Blair's craftiness could provide some fun chemistry with Nene as each is a savant at interior passes and basket cuts. Blair and Humphries do come with limitations, the most significant of which is that neither provides any rim protection. Blair's defensive value lies in his quick hands and strength, but bigger, skilled players can take advantage of his size. This means that the Wizards are once again dependent on Gortat as their only real rim protector. As long as he stays healthy, this shouldn't be too much of a problem. A Gortat injury could create a significant ripple effect on the team's defense, however.

The team is also relying on contributions from last year's rookies. As a relatively experienced team, Washington was able to get by without anything from Otto Porter or Glen Rice Jr. Each played very sparingly, and ineffectively, last year but looked much improved during Summer League. If they can give Washington competent bench production on the wing, that will take a lot of pressure off Pierce, Miller, and the recovering Webster. Porter was dreadful last year, especially for a top 5 pick, but, albeit in a minuscule sample size, was far better in the second half.

Barring a catastrophic run of injuries or misfortune, the Wizards should still make the playoffs. On paper, Pierce and Blair are clear upgrades over Ariza and Trevor Booker, Beal and Porter are young enough to make significant strides, it's possible that Nene will actually be healthier than he was last season, providing a big boost to the team's defense and offensive flow, and Gortat and Wall should remain viable All-Star candidates. If everything goes right, they should be better than they were last year. Everything rarely goes right however, and the Wizards already improved by 15 wins last year. It is very difficult to make dramatic improvements in consecutive offseasons. Making the playoffs in the Eastern Conference should not be a difficult task, but a lot went right for Washington last year. For them to take the next step, a lot needs to go right for them again.