The latest update in the 2014 #MuscleWatch. What did Shabazz Muhammad eat for lunch yesterday? Will Michael Beasley play for the San Antonio Spurs? These are the musings for Thursday, September 18th.

Share All sharing options for: #MuscleWatch Update: Shabazz Muhammad. Michael Beasley....to the Spurs? POLL: What Will Happen to J.J. Barea?

Hello, everyone. First and foremost, thank you for the support and suggestions regarding the CH Program. They are sincerely appreciated. As I said yesterday, we're going to do our best to bring you a product that doesn't suck. Provided you guys (and gals) aren't sabotaging the show by purposefully suggesting bad ideas, I think the program is going to be loads of fun. Now, onto the musings.

Using the hashtag #MuscleWatch, we are able to follow the progress of certain Minnesota Timberwolves as they prepare for the upcoming season. I believe the trend began a few months ago, when this picture indicated Ricky Rubio has bulked up this summer.

Weeks ago, after being introduced at the State Fair, Anthony Bennett answered a few questions and revealed a procedure had taken place two-weeks earlier to remove his tonsils and adenoids. This surgery is very common and often performed on those who struggle to keep their breath during workouts and/or suffer from sleep apnea.

Perhaps now rejuvenated, Bennett along with Shabazz Muhammad are currently training in Santa Monica, California. I imagine their intent is to shed as much weight as possible before training camp.

This picture was posted on Bennett's Instagram two weeks ago. Sustainable results?

Yesterday, #MuscleWatch returned when Shabazz posted the tweet below. Just as a reminder, he weighed 222 pounds entering the 2013 NBA Draft Combine-- this is according to DraftExpress.

The chameleon athletic training seems to be working well for Bennett and Shabazz. I suppose it's our responsibility to inform you of any #MuscleWatch updates, but here's a link to the hashtag if you'd like to keep track on your own time.

Now, what about dietary habits?

Shabazz Muhammad ate lunch across from me today. #NBAInSeptember

No, unfortunately, Max was unable to provide details of the exact meal Shabazz grubbed yesterday. Still, I wanted to discover more details about Swingers and I found the restaurant serves only farm fresh, organic eggs. Additionally, the menu is full of hardy and healthy things to eat.

Meandering onto the 'history' portion of Swingers' website, I was told everything I needed to know about said establishment. 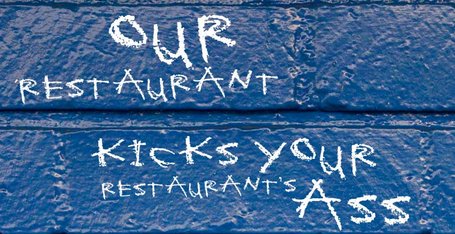 It's decided. This means Shabazz Muhammad is going to average 20 points and 10 rebounds this season. Thanks, Swingers. How could we ever possibly repay you?

On Tuesday it was reported the Wolves signed 2nd round draft pick Glenn Robinson III. This was confirmed by the Wolves in a press release, yesterday, although details of the contract have yet to be revealed. It is speculated Robinson III signed a one-year deal which, if he is to make the team, allows him to become a restricted free agent next summer.

The addition of Robinson III (or, GR3) strengthens the widespread inclination J.J. Barea's days with the Timberwolves are numbered. It is common belief Barea will either be traded or have the remainder of his contract bought out by the team.

Barea, only after being paid what he is owed, could be released at any time.

As of today, the Timberwolves have 18 players on the roster-- including Brady Heslip and Kyrylo Fesenko. Heslip and Fesenko played with the Wolves at the Las Vegas Summer League and have been invited to participate in training camp activities. Before the beginning of the season, though, the roster must contain a maximum of 15 players. Barea, Heslip and Fesenko will likely be the ones to go.

However, rehashing something that has been discussed, there are a lot of wings on the roster. There is a lack of depth at power forward. Could Flip Saunders fandangle one of the wings aside Barea and execute a trade that way? Or, is he limited to strictly buying out Barea's contract and wishing him happy trails?

I ask for your participation in the poll located at the bottom of this post.

On a different note, the latest issue of SLAM Magazine (182) features Zach LaVine and Andrew Wiggins on the cover. They stand among peers from the 2014 Draft Class replicating a cover of SLAM published back in 1996. Here is a picture.

And, why not show the old cover. 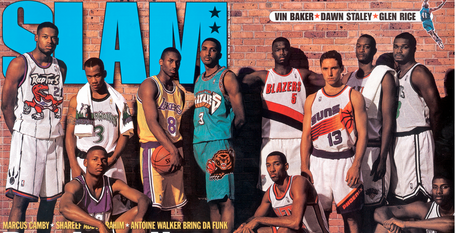 Did anyone see this coming?

Michael Beasley hasn't played a full season since his rookie year with the Miami Heat. Beasley appeared in only 55 games last season, but was quarantined in the playoffs and, in general, Beasley didn't contribute very much during his second stint with the Heat. It's unfortunate when elite prospects don't pan out once they reach the NBA -- this is especially true with Beasley.

If the Spurs can't salvage some production out of him, I'm not sure anyone can. That said, he hasn't even made the team yet -- we don't need to get ahead of ourselves. Personally, I hope Beasley finds a home there and does well for himself.

#Nuggets F JJ Hickson will be suspended for a violation of the NBA's drug policy.

According to Chris Dempsey, NBA Writer for the Denver Post, the Nuggets are aware of the situation but aren't expected to comment.

The element making this story a curious one: Marijuana is legal in Denver, Colorado. So, even though Hickson may have not violated any local or state laws, he is still being punished by the NBA for violating the league-wide policy.

I didn't realize Metal Monday was such a coveted thing.

My apologies for taking MM away from you earlier this week. I was lazy and unaware there is an audience for this type of music here at CH. I'm making it up to you today.

Sunday, November 2nd, As Blood Runs Black (see video below) will be playing at the Amsterdam Bar in St. Paul. A few local bands will be opening for them, Portraits of War is one of those bands.

Shouts to PoW's guitarist, Luke Moran. He's a friend. Friends support other friends in their endeavours. This is me supporting Luke on his endeavour. He better be reading this.

Canis Hoopus is not receiving compensation in exchange for promoting this concert.