As the season approaches, it's time to take a look at the Wolves players and what we might expect from them in the upcoming season. Today's subject: Corey Brewer.

In some ways, Corey Brewer's first season back with the Timberwolves was his best as an NBA player. Brewer started 81 games and played more minutes (2609) than he had in any previous season.

He established career highs in TS% and EFG%, driven by his 55% shooting on two point shots. 47% of his shot attempts were at the rim (0-3 feet) and he made a 68% of those attempts, both career highs.. More starkly, dunk attempts were 11.6% of his total shots, also the highest of his career. In short, he got and converted good looks better than he ever has.

Brewer also saw his usage fall to 16.5%, from over 20% in his two seasons in Denver; in context a good thing as he was regularly on the floor with higher volume and efficiency scorers like Kevin Love, Nikola Pekovic, and Kevin Martin. On the other hand, while his three point attempt rate was down slightly, threes still accounted for 26% of his attempts, and he made them at only a 28% clip, right in line with is career averages. 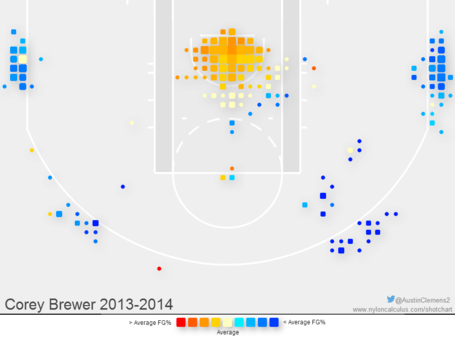 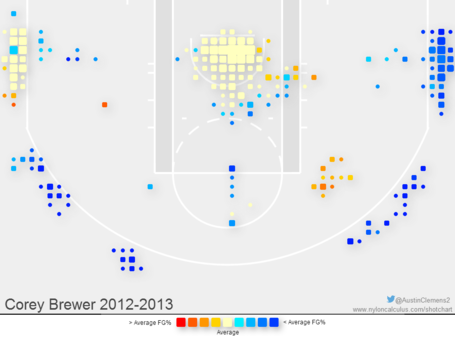 Brewer is a poor perimeter shooter, and opponents know this. He is invited to shoot the ball, and does so, to the detriment of the team. We see that his success last season came from an increase in attempts and a better conversion rate around the rim. In the half court, teams routinely left him open on the perimeter, leading to a lot of open shots, and a commensurate number of clanks.

The essential tension in Corey Brewer's offense is transition vs. spot-ups. The past two seasons saw a flip in those areas, as his spot-ups declined from 32.4% of his attempts in 2012-13, to 26.6% last season(as transition took up a larger share). His ppp on spot-ups remained consistent (.86 ppp) but the Wolves were able to get more of his plays in transition, where he is much more effective. His spot-up ppp hovered around 250th in the league both of the last two seasons.

This was a tactical choice on the part of Rick Adelman, one that seemed to work out for the Wolves. Brewer was relieved of his defensive rebounding responsibilities (a career low 6.2% DRB), which made sense given the presence of Kevin Love on the boards and the fact that Brewer has never been a strong rebounder anyway. He was instructed to leak out on opponent shots in order to beat the transition defense down the floor. Combined with Love's remarkable outlet passing, Brewer was able to get free open floor looks on a regular basis.

Obviously, this changes going forward. Without Kevin Love on the boards, and making those outlet passes, the freebies are going to be harder to come by for Brewer, not to mention that the Wolves are going to need all hands on deck to battle for rebounds.

Of course, Brewer's main calling card has always been defense, though his gambling style is not always successful. He was 2nd on the team (behind Ricky Rubio) in steal % last season, but it came at a price. Brewer gave up .92 ppp when his man finished a play, which was 298th in the league. In other words, not good. He was relatively poor in almost all areas, particularly isolations and spot-ups. Some of this can be attributed to his penchant for cheating off his man to provide help, and the fact that he was playing heavy minutes matched up against opponents best wing scorer, but the numbers aren't kind. And they are not appreciably different from the year prior, in Denver, where he was 279th in ppp against, once again struggling particularly in spot-up defensive situations.

So what should we expect from Brewer this season?

One thing we can expect is fewer minutes. It was not Rick Adelman's intention that Brewer would be the starting small forward and average over 32 minutes a game last season, but injuries (to Chase Budinger especially), inability to play the position (Derrick Williams), and unreadiness (Shabazz Muhammad) forced him to run Brewer out there every night for a lot longer than anyone really wanted.

As John wrote about a few days ago, there is no shortage of wing players with guaranteed contracts this season. It's likely that Brewer returns to a bench role as Andrew Wiggins (who could turn out to be a very similar player) gets the starting job. Either way, Brewer is likely to play less, as Wiggins and a hopefully healthy Chase Budinger are also primarily small forwards.

This is a good thing. Even at his best, Brewer is not somebody you want out there 30+ minutes a night. To the extent that he has a role on a good team, it's as energy off the bench in no more than 20 minutes. This is especially true this year, as circumstances are unlikely to be as favorable for him going forward.

Unfortunately, for the reasons discussed above, I suspect we will see an offensive regression from him as well. He is unlikely to get as many easy transition buckets, even if the Wolves remain a high-paced team. There won't be those full-court outlets from Love, and thus there will be fewer uncontested opportunities. Transition will still be a big part of his game, but I expect the balance to shift back toward spot-ups being a larger part of his offense. We have enough data now to know that he is simply not a quality spot-up shooter, and so overall, his offense is likely to be worse.

In truth, Corey Brewer has reached the point in his career where we know what to expect of him: energy, steals, excessive defensive gambling, a willingness to run the floor, and poor shooting and ball handling in the half court. What it adds up to is a guy who, in an ideal world, is on the edges of a rotation, inserted for specific purposes and limited minutes, not someone who should be a central figure. He's probably getting paid too much for his ideal role, but hopefully others emerge for the Wolves this season and Brewer won't be asked to do more than he should.

Best Case Scenario: Wiggins both earns and gets the starting small forward role, and Brewer comes off the bench with energy for 15-20 minutes a game while tamping down his three point attempts.

What do you foresee?