Musings: World Cup Drama, Wolves Columns From Around the Web

FIBA's World Cup rolls on. A display of cultural indifference was bound to happen, or maybe it was just a misunderstanding. Either way, respect is important. Other people write about the Minnesota Timberwolves, I've shared some of their work.

Share All sharing options for: Musings: World Cup Drama, Wolves Columns From Around the Web

The matchup between Puerto Rico and the Philippines provided drama early Tuesday morning, because the outcome was decided within the final few minutes. Andray Blatche committed a critical turnover at the 1:17 mark that resulted in a layup made by J.J. Barea that put the Puerto Rican's up, 72-70. Shortly thereafter; Blatche missed a three, Barea made a few clutch free throws, and things unraveled for the Philippines during the final minutes.

France isn't the same team as they were when these two met at Eurobasket last summer, which is why Spain prevailed in this one quite easily. Ricky Rubio was involved immediately, tallying two; assists, rebounds and steals within the opening five minutes of the game. He finished with four points, rebounds as well as five assists and three steals. It was Rubio's 100th appearance with the Spanish national team. He's 23 years old. Marc and Pau Gasol combined for 32 and Serge Ibaka added 10 points in the victory.

Nicolas Batum and Boris Diaw, combined, were 6 of 21 shooting from the field and managed to score only 14 points. Batum was responsible for 11. Both of them struggled. The entire team did.

Tiago Splitter displayed his all-around game helping Brazil overcome a strong performance by Serbia's Milos Teodosic. Splitter scored 10 points, grabbed seven rebounds and dished out six assists while Teodosic scored 14 points in addition to five assists for the Serbs. Brazil outscored Serbia 21-9 (!!!) in the fourth quarter after trailing 60-64 heading into the final frame. It was a truly inspirational finish, unless you were pulling for the Serbs.

Recent spotlight on Gorgui Dieng's performance in the World Cup shined elsewhere as Senegal was demolished by the Argentinians, yesterday, behind Luis Scola's 22 point, 14 rebounds rebound performance. Dieng played as well as he could considering the circumstances. He was still the best performer on the losing side by a significant margin, scoring 11 points and collecting eight rebounds in the loss.

Yeaaaaa. After being ahead by a mere three points entering the second quarter, the US started pulling away as only they know how as the game progressed. At one point, beginning in the third frame, they took a 22-0 run into the fourth quarter and it felt as though the Dominicans weren't going to score until their next matchup. There was an abundance of scrutiny, or seemed to be, surrounding Kenneth Faried after Team USA solidified its roster. Not so much the case, anymore, as he's played remarkably well throughout the tournament. Faried scored a team-high 16 points on 8 of 11 FG shooting while also snagging six rebounds.

Next up for the Americans: Ukraine

On Tuesday, Team USA watched as their opponent performed the Haka-- a traditional ancestral war cry, dance or challenge from the Māori people native to the island of New Zealand. Here's a video.

A byproduct of the World Cup, a collection of nations assembling to play a tournament within a host country, has always been learning a thing or two about different cultures other than my own. In my opinion, the haka is a unique tradition that I find interesting-- to say the least. As you saw by the American's reactions, some players seemed flabbergasted at what they saw happening before them.

Andre Iguodala took his thoughts about the haka to Twitter, which, he probably could have gone without doing. Oklahoma City Thunder center Steven Adams, a native of New Zealand, didn't see Iguodala's remark as respectful and made him aware of that with a tweet of his own. 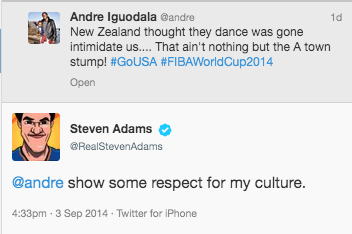 Did Iguodala mean to offend anyone with his remarks? I don't know. Should he have kept that thought to himself? Maybe, but he's an adult responsible for his own decisions. I wouldn't have said anything, though.

While I'm here talking about culture...

I can't overstate what's already been said about Robert Silverman's piece referenced in the tweet above. Native American Basketball Team in Wyoming Have Hoop Dreams Of Their Own tells the tale of a group who make their own conditions for victory, on and off the court.

Anthony Bennett and Navigating the Positional Maze, written by Ian Levy, addresses a potentially problematic circumstance the Wolves encountered after drafting Derrick Williams not long ago.

"Bennett doesn't have to be a small forward or a power forward-there is a niche for him between that rock and that hard place. Still, he has to be something and now is the time and place to start figuring it out."

Could Bennett be a tweener? The thought hadn't crossed my mind. He's really the forgotten asset in the Kevin Love deal that gave the Wolves coveted two-way extraordinaire Andrew Wiggins and the versatile Thad Young. Either way, as Levy stresses, it's a fresh start for the former number one overall draft selection-- we'll see if Bennett makes the most of it.

Speaking of Thad Young, Steve McPherson's "Work in Progress: Molding Muhammad" implies Shabazz Muhammad must embrace his inner-weirdness and can do-so by modeling his game similar to that of Young's.

Diversity, patience, adaptability: these are the keys to Young's success as a smallball power forward and they can be the keys to Muhammad's success as a barrel-chested wing who likes to work in the paint. His game is weird, but for Muhammad to maximize his potential he needs to embrace that weirdness, that in-betweenness, and make it his own.