These are the musings for Friday, September 5th. The World Cup bracket is set. I've provided some links to some other various NBA news. Read Key's article about Anthony Bennett if you haven't already.

Hello, everyone. I'll just stick to a similar format as yesterday's musings. From there, who knows what will happen. You see what I do here? I just write a few words to amp myself up or else nothing transpires. Ooookayyyyyy. Time to get moving.

Group stages are now complete and the FIBA World Cup has entered bracket play. Here's a link to the full bracket. 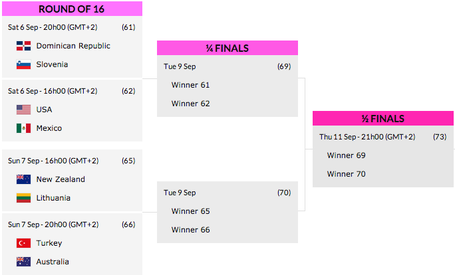 Team USA faces Mexico in the Round of 16. Mexico finished fourth in Group D by defeating Korea and Angola, who are both eliminated. Lithuania, Slovenia and Australia had little trouble defeating Mexico during the group stages and the Americans will certainly follow suit. You can see the game on ESPN2, Saturday at 11:00 AM.

The USA will face either the Dominican Republic or Slovenia in the Round of 8.

Basketball is a beautiful sport, there is no room for fixing the game like today Australia vs Angola!! @FIBA should do something about that!

Australia intentionally rested players against Angola, yesterday, knowing losing could work in their favor. Had the Australians prevailed, they'd be facing the Dominican Republic and would ultimately face the U.S. in the second round. Neither team wants to play Team USA in the Round of 8. Why would they?

Barring a bizarro course of events, the consensus is Australia and Slovenia aren't capable of conquering the Americans in the knockout stages of this tournament. Was what Australia did somewhat unethical? I wouldn't describe it that way.

Anyone that has played youth sports and experienced that type of scenario understands it's something that happens and there isn't much that can be done about it. If Slovenia had pummeled Lithuania during, Australia would've finished 2nd in Group D and the discussion would have been moot.

Instead of the Dominicans, Australia gets an opening round meeting against Turkey, who was the toughest challenge for Team USA thus far. We'll see if throwing a game to land on the opposite side of the bracket pans out for the Aussies. If they're able to defeat Turkey, and then the winner of New Zealand and Lithuania, they'll face the American's in the semifinals-- this guarantees at least an opportunity to play for a medal.

On the other end.. 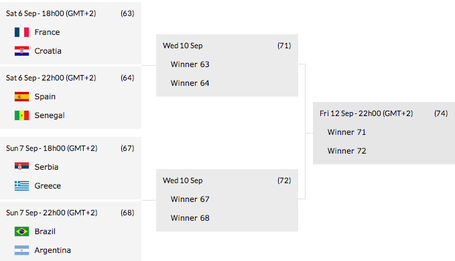 It is in my estimation Spain will roll through to the Championship Round, after defeating either Serbia or Brazil in the semi-finals. Maybe Argentina will upset Brazil on Sunday, but I doubt it-- don't hold me to any of this, please. It does look as though everyone will get to see the coveted USA-Spain final, though, which will be fun.

Round of 16 play begins Saturday at 11:00 PM with Team USA facing off against Mexico.

.@MooreMaya has completed her rookie contract and is now a restricted free agent. @minnesotalynx have right to match any offer. They will.

ICYMI: The Puzzle that is Anthony Bennett. (Key Dae)

Andy G. and Patrick J. on how the Timberwolves may use the D-League. Which players, if any, do you believe will be sent down?

We see four main candidates to do hard time in the D-League this season: Zach Lavine, Shabazz Muhammad, Robbie Hummel, and Anthony Bennett.

Thinning the Herd (The Field of Dreams Edition).

Anyone like Thrice? I could listen to The Illusion of Safety over and over and never get tired of it.