The FIBA World Cup is down to eight teams, the tournament resumes tomorrow. Atlanta Hawks owner Bruce Levenson seems to have put himself in an odd predicament.

The FIBA World Cup is down to eight teams. Here's what Team USA's side of the bracket looks like. 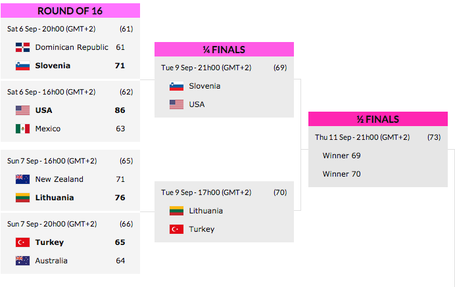 There aren't many reasons to believe Slovenia will defeat the Americans on Tuesday. Indirectly, Goran Dragic, Slovenia's best player, didn't seem thrilled at the possibility of meeting Team USA in the Round of 8-- I'm judging by this tweet he sent out few days ago. Does Dragic even think his team stands a chance?

Interestingly, Australia, who conceded a game during group play to avoid being in Slovenia's current position, was eliminated by Turkey yesterday. Turkey will meet Lithuania, who defeated Australia and Slovenia during group play, tomorrow and the winner will likely face Team USA in the semifinals.

On the other side... 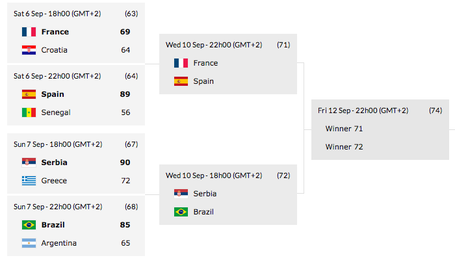 Perhaps the most competitive matchup in the Round of 8 is between Serbia and Brazil. The Serbs were defeated by Brazil during group play, but only by eight points. Considering Spain made easy work of France within the past week, it's hard to imagine they'll falter when these two play again on Wednesday. If I had to guess, Brazil will meet Spain in the semifinals which are scheduled for Friday.

Selfishly, I'm hoping to see Milos Teodosic (Serbia) go against the Spaniards once more before the tournament is over.

I'm not picky, though.

In a statement released Sunday, Bruce Levenson, controlling owner of the Atlanta Hawks, decided that it is in the best interests of the team, the Atlanta community, and the NBA to sell his controlling interest in the franchise. This announcement came as a surprise, Sunday, when it was learned by many Levenson self-reported an email sent to general manager Danny Ferry, which was CC'd to co-owners Todd Foreman and Ed Peskowitz, containing inflammatory remarks regarding (some of) the Hawks fanbase.

The email, which addressed concerns regarding stadium attendance numbers, is full of suggestions and ideas as to how the Hawks could potentially sell more tickets at home games. Atlanta finished 28th among the NBA in attendance totals last season. Levenson self-reported his remarks in July and, subsequently, the NBA initiated an independent internal investigation into the matter.

I’m truly embarrassed by my words in that e-mail, and I apologize to the members of the Hawks family and all of our fans. To the Hawks family and its fans, you have my deepest gratitude for the past ten years. Working with this team and its extraordinary executives, coaching staff, and players has been one of the highlights of my life. I am proud of our diverse, passionate, and growing legion of Hawks fans, and I will continue to join you in cheering for the best team in the NBA."

It is reported Ferry is also facing disciplinary action for his involvement with the email. Hawks co-owner and CEO Steve Koonin will oversea team operations, presumably, until a sale is consummated.

I assume Ferry, Foreman, Peskowitz and Levenson are well-spoken, smart businessmen who would be capable of keeping these things under wraps and away from the general public. That said, what's the 'gig' here? Did Levenson self-report said email because of what happened to Donald Sterling not long ago? Was he afraid one of his cohorts would let this slip, allowing Levenson to be the next Sterling type figure?

It's certainly a unique situation, and this isn't the last time we'll be hearing about it, either. One would think, Adam Silver may speak publically regarding Levenson's email in the upcoming few days. Your guess is as good as mine.