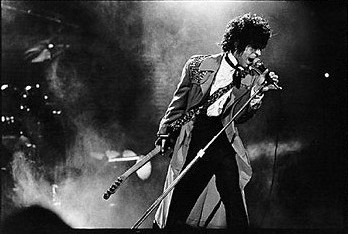 My first memory of Prince was sitting in the pews of Saint Kevin's, a long-since-forgotten Catholic Church tucked in between crosstown and the airport near the dead end of 28th Avenue in south Minneapolis.

Father Jeub, who has since been banished from active priesthood due to his love of married female parishioners, had bees in his bonnet over some song by some pop star about Ronald Reagan and Russia. I had no idea what he was talking about other than that this stupid pop star was going to make America more likely to lose the Cold War...or something. I only remember because I thought the world would blow up and that this likely meant more hiding under desks as practice for how to meet the nuclear winter with dignity and order.

In college, I would trace the lines from this memory to Ronnie, Talk to Russia on the album Controversy. I quickly realized that our stupid priest was upset about a song written 4 years prior to his sermon. I have tried to think of reasons why this song caught his attention when Purple Rain was already on the radio and Darling Nikki seemed to provide much more fodder for angry Catholic sermons. I can think of none. Maybe he didn't want to tip his hand in regards to his feelings for the ladies in the audience.

I remember learning to rollerskate to Little Red Corvette. My little league baseball coach would show up to practice at Bossen Field in his old Chevy blasting When Doves Cry. The first song I ever saw my mom dance to was 1999. Loving Bat Dance is the first time I ever felt self-consciously corny but didn't really care what other people thought. My first kiss was made during Purple Rain at the 6th grade school dance. My first serious girl friend and I would smoke weed and listen to Sign of the Times and play cards for hours on end. Talking, listening, and loving every second of that part of our lives. I haven't talked to her in years and she emailed me this morning to ask if everything was ok. I was working on one to her when it arrived in my inbox.

I have scores of these moments. I had one this morning when one of my neighbors blasted Purple Rain on their stereo outdoors and it brought just about everybody on the block out to hug and tell their favorite Prince story. This man mattered so much to so many people.

I can't tell you that I have an intellectual attachment to Prince's music in the way that I do the work of David Bowie or David Byrne, yet his music has been a part of my life in a very visceral way for a very long time. He has been the soundtrack to moments of my life I will never forget, and I suspect there are countless others who have a similar relationship with the man.

Everybody in town has a Prince story. Everybody has a Prince record. Everybody has a favorite Prince song. Everybody loves to sing along to the end of Purple Rain. Best of all, every single place I have been in this world, the second someone finds out I am from Minnesota I am met with the following question: Have you seen Prince?