The Lynx made a statement against violence before the game, then went out and dominated the Dallas Wings tonight at Target Center.

Two hours prior to the Lynx home game against the Dallas Wings, their captains: Lindsay Whalen, Rebekkah Brunson, Seimone Augustus, and Maya Moore, held a press conference wearing the shirts pictured below. They called for action to stop the violence that continues to rage through our country, and particularly to react to the killings of Alton Sterling in Louisiana, Philando Castile in Minnesota, and the dead at the hands of a sniper in Dallas.

The entire Lynx team wore these shirts for warmups and on the bench. 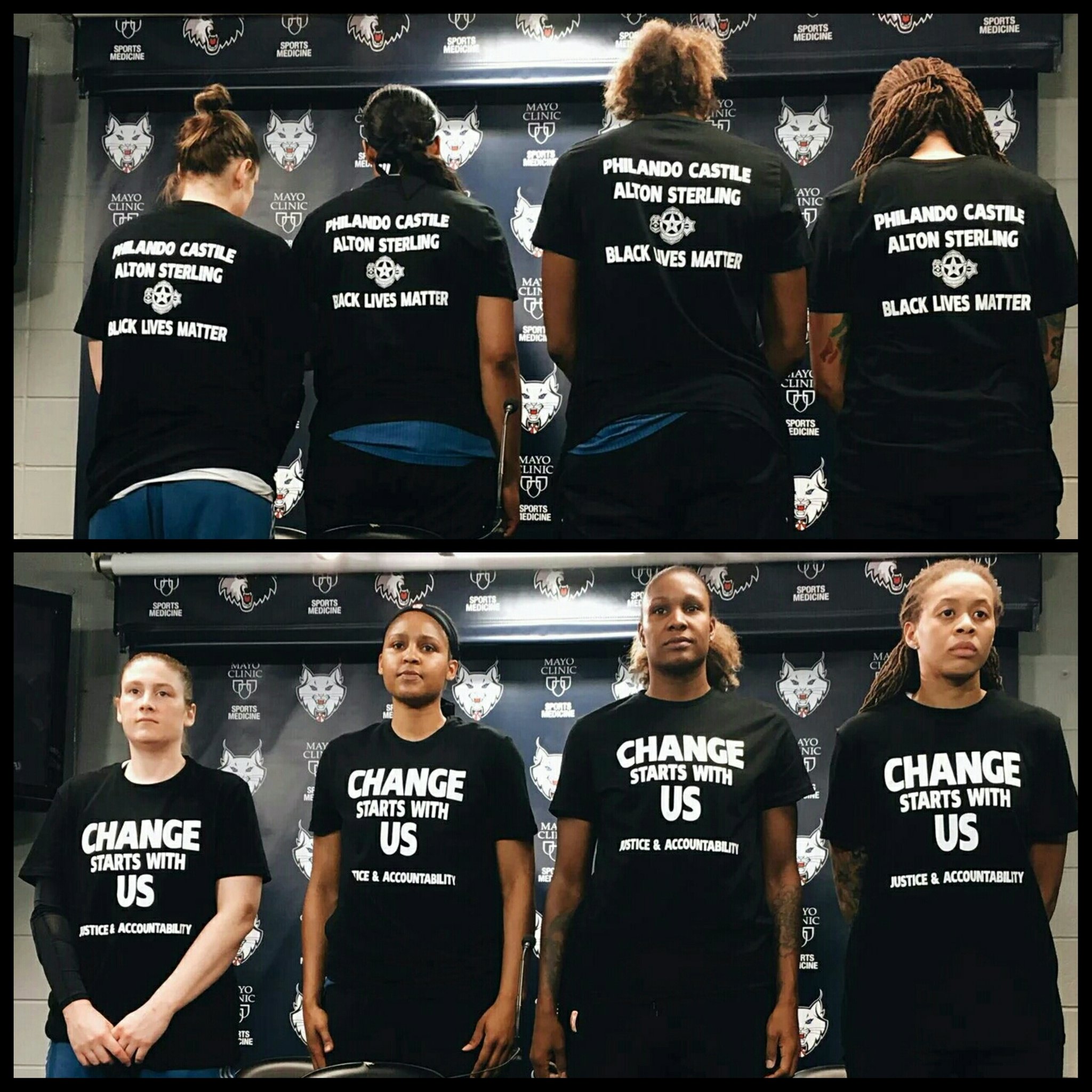 The game itself was a rout.  The Wings were without Glory Johnson, their top rebounder, while the Lynx sat Seimone Augustus for the 2nd straight game with knee trouble.

After falling behind 9-5, the Lynx simply obliterated the Wings, going on a 40-4 run through the rest of the first quarter and half of the 2nd, and the game was over. The Lynx have had trouble holding leads recently, leading to a couple of disappointing losses, but it wasn't happening tonight.

The Lynx were aggressive in transition, looking to push at any opportunity, and almost everything they got early was in the paint, either on drives in transition, cuts to the basket, or post-ups that the Wings simply couldn't defend. Lindsay Whalen was particularly effective early, making her first five shots, four on basket attacks in transition or semi-transition. She continued throughout, finishing with 22 points on 11-13 from the field, in her strongest outing of the season. There have been games this season where she has not been able to handle opponents' pressure defense, but tonight she looked like prime Whalen, in complete control and getting whatever she wanted.

The other instigator tonight was Natasha Howard, who came off the bench on fire and scored all 12 of her points in her first shift spanning the first and second quarters. She was beating the WIngs down the floor like they were standing still, and was a key factor in the giant Lynx run that decided this one early. She's been spectacular all season--showing significantly more game than I remember seeing from her when she was on the Indiana Fever last year. The trade of Dev Peters for her in the off-season is paying off as she is blossoming before our eyes. Her defense is excellent, she boards, she puts herself in the right spot, and her touch around the basket has been a revelation.

The Lynx shot only 3-17 from three, and made 10-18 free throws, but their ability to get in the paint and to the rim is the reason they shot 37-59 from inside the arc.

It was a thorough performance, with the defense equally contributing. They held the Wings to under 25% from the field, and Skylar Diggins and Odyssey Sims combined to go 2-18. The Lynx dominated the glass and won the turnover battle as well. In short, it was a comprehensive beating, administered by a team clearly still stinging from their blown lead and overtime loss in Connecticut.

The record margin of victory in a WNBA game is 46, and the Lynx flirted with that--building a lead as high as 46 in the 4th quarter, before finally winning by 37 points. It was a dominant performance by a team in need of one, on a night when they reminded us that there are more important things than basketball, and that it starts with all of us.