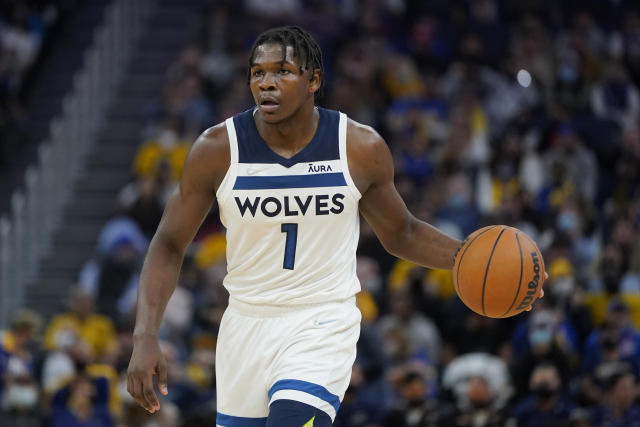 Fluke Start or a Bad Stretch? Can they turn it around?

After a very impressive start to the season going 3-1. The Timberwolves now face a very daunting situation where they have lost 6 of their last 7 games and are currently 4-8. A blow out win versus the Lakers followed up by a blow out loss to the Clippers - it's hard to pin point exactly what is going on with the team. Or if your a basketball truther and been following the Wolves since the start - you can immediately identify what is going on. I have decided to grade the Wolves based on their 12 game start.

*Let's start with the coach Chris Finch. During the summer, the Wolves focused more on their defense and how they will be flying around the court all year. That defensive intensity that the Wolves started the season with does not appear to be in the players minds anymore and now the Wolves are once again one of the worst defensive teams in the league. Now you may say, that would be the players fault and not the coaches but in reality it is the job of the coaches to hold players accountable if they are not meeting the performance standards.

Not holding players accountable appears to be the reason the offense has not been great either. Despite having 3 extremely talented offensive players in Karl-Anthony Towns, Anthony Edwards and D'Angelo Russell - the Wolves do not seem to be utilizing them correctly. There are times where Towns cannot find the ball and when he gets the ball - he is out of rhythm or out of place to do anything with it. Russell has not been used as a pick and roll maestro that he is accustomed to. And Edwards has been let free to take a bunch of out of rhythm shot attempts. It goes down to that the coaching staff and Finch has not installed a valuable offensive set that will benefit those 3 and those around. 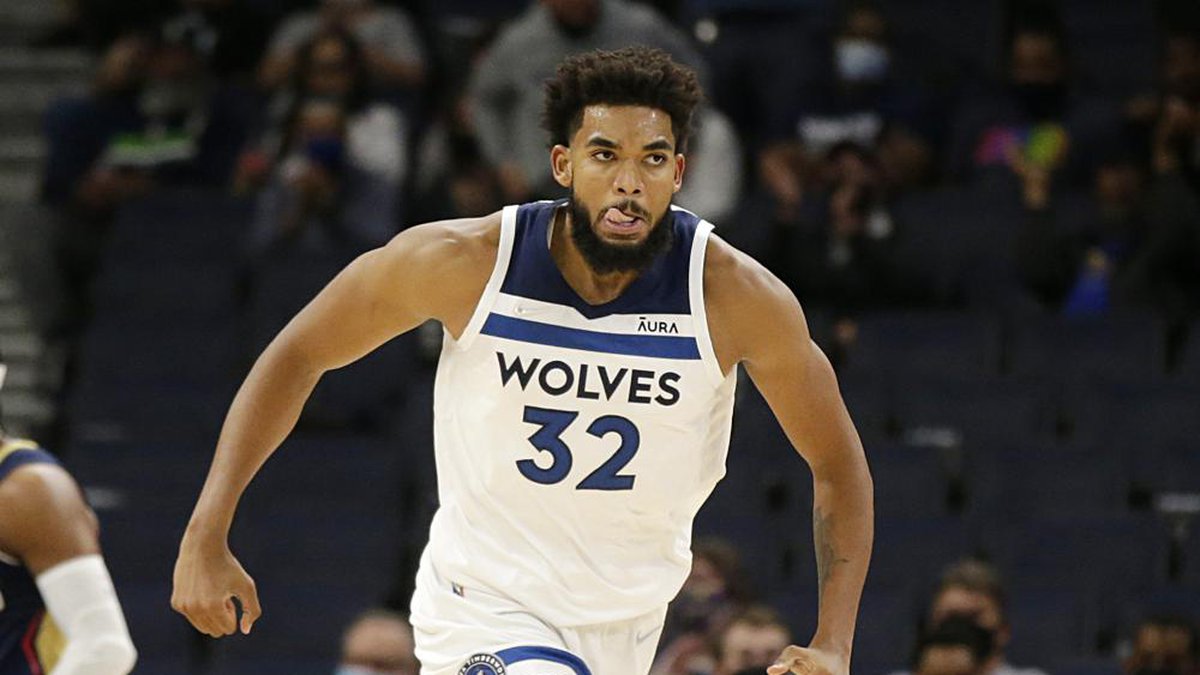 Karl-Anthony Towns: No Longer Consistently Assertive, Not a lot of joy out there, Appears to be rapidly growing frustrated with the team.

*To start the season, Karl-Anthony Towns was having an MVP like contributions and appeared to be turning into a brand new superstar before our eyes. As of late, there doesn't appear to be any ambition in Towns psyche and you can tell by just looking at how he plays. He looks visibly frustrated. He isn't touching the ball when he has mismatches and that will annoy any player, and the team has slowly allowed Anthony Edwards to take any shot he wants whether it be good or bad (a lot of bad).

Outside of the Lakers game where he clearly looked confident against Anthony Davis & Dwight Howard, he has been grounded by a number of bigs including Kevon Looney & Ivica Zubac. That kind of signals to us that KAT is not really trying his hardest out there anymore. It's still early in the season but this is not a good look for Towns as one of the leaders of the team. The team succeeds when he (and D'Angelo Russell) plays with his heart on his sleeve. 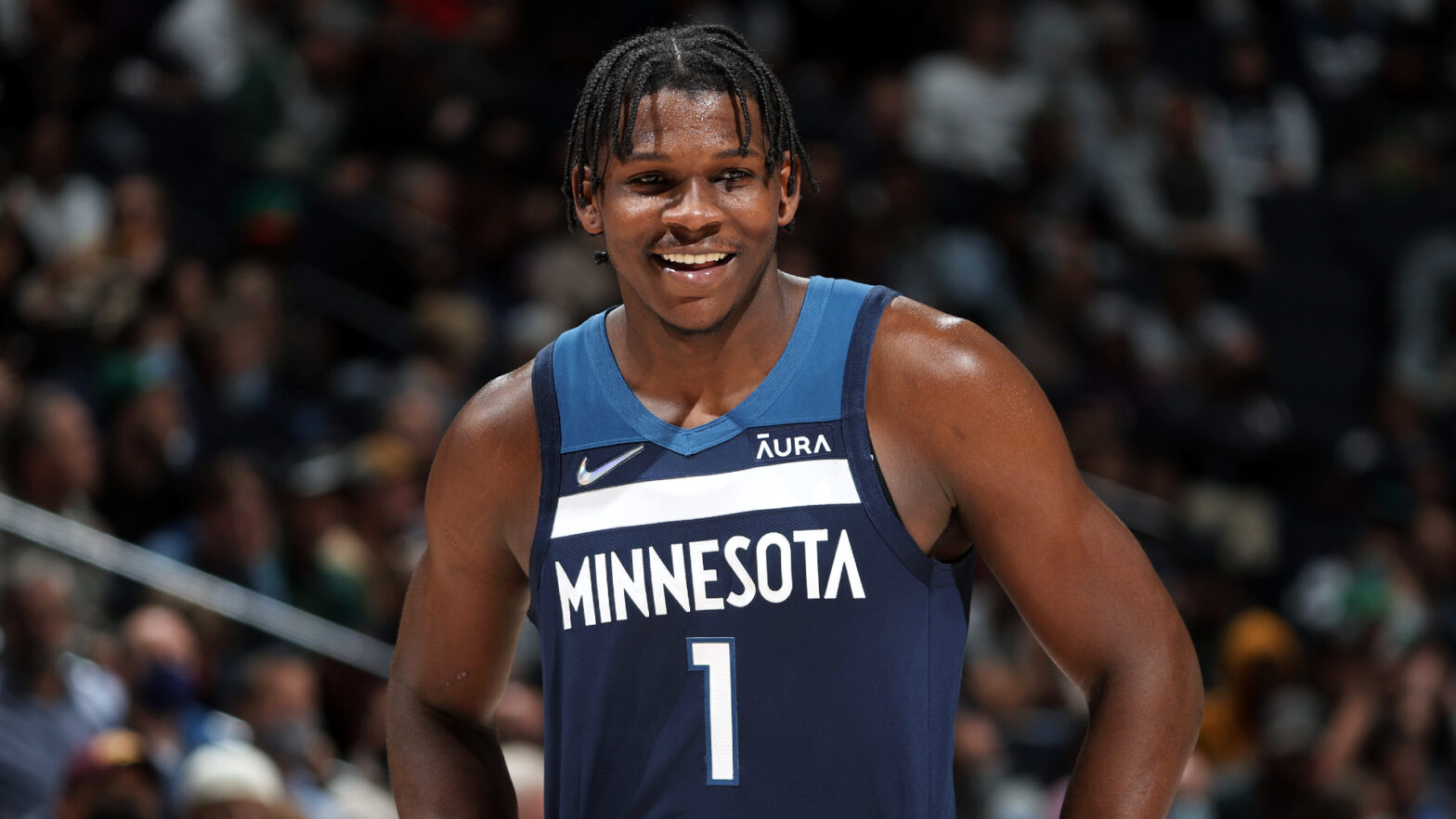 *Timberwolves fans are not gonna like what I am about to say but it needs to be said. Anthony Edwards has been a problem. The numbers look great yes. The scoring looks promising and he clearly has loads of potential. But for a team that is looking to thrust itself into playoff contention - it needs to be a collective group effort. Every time Edwards touches the ball, his teammates know he is not going to pass it to them even when it is clear he does not have the clear lane to score therefore the effort from everyone else evaporates.

As I said, the numbers look great. 48 points against the Warriors. But his scoring gravity does not open up for everyone else and teams know that. He currently has the teams highest shot percentage and the lowest pass percentage. 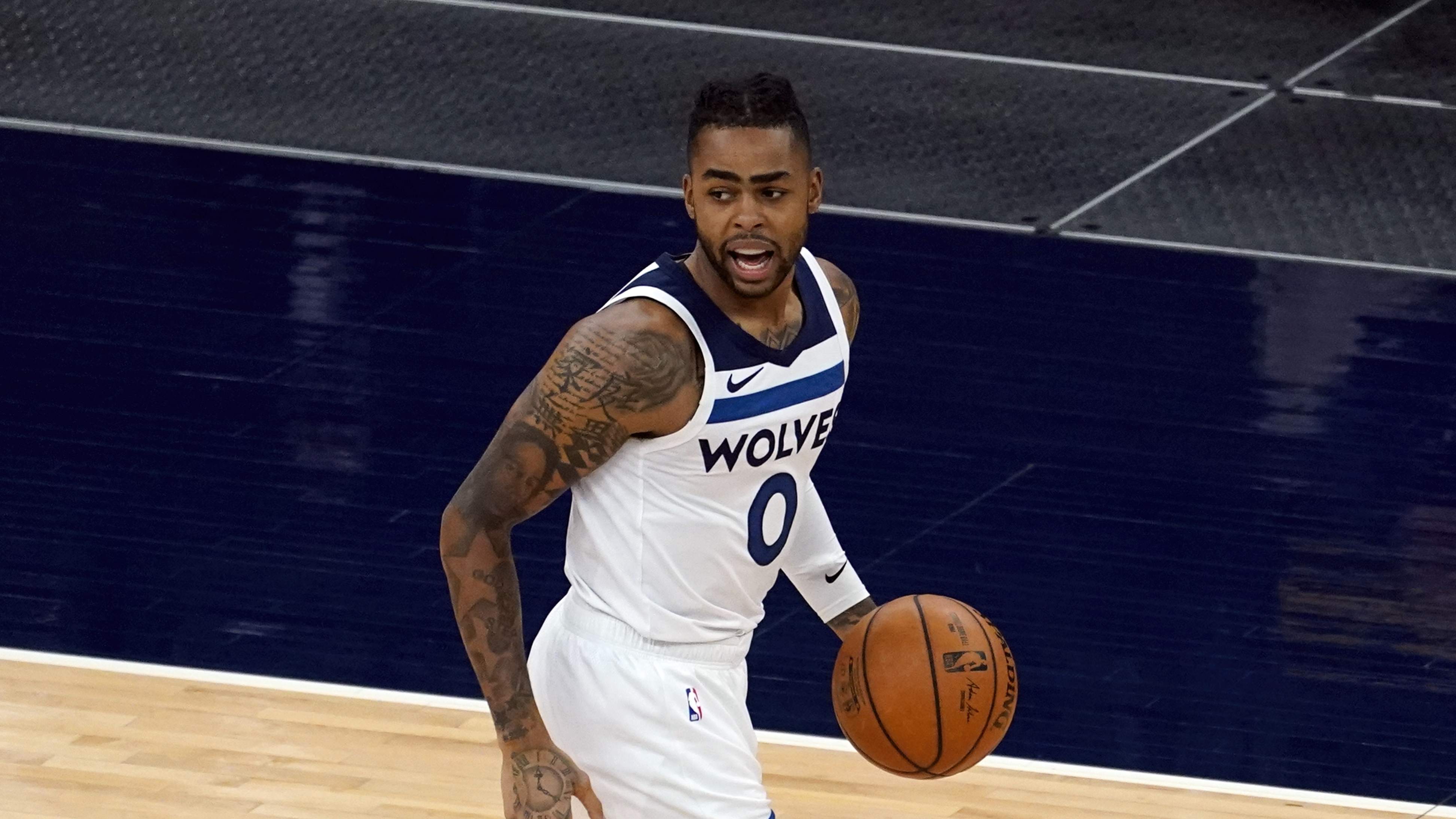 D'Angelo Russell: Picks and Chooses when to be Assertive which is a No-No.

*Believe it or not, the numbers don't lie. Even with the rough start D'Angelo Russell has been the most impactful player on the Wolves and is currently leading in net rating by a mile. The offense is more poised when he is in. However, the team does not get an extra push from Russell whenever he is disengaged. What I mean by that is Russell plays in spurts. He picks and chooses when he wants to be aggressive compared to starting the game in attack mode. He does a lot better when he is constantly in attack mode which opens up for everyone else. He tends to get very passive which doesn't help the team at all.

For a while it seemed his defense has been getting better but returning from the ankle injury has seemed to dial it back for him a bit. His shooting also has looked better as of late but just like KAT, DLo has been having an energy problem where he also has been looking very frustrated. 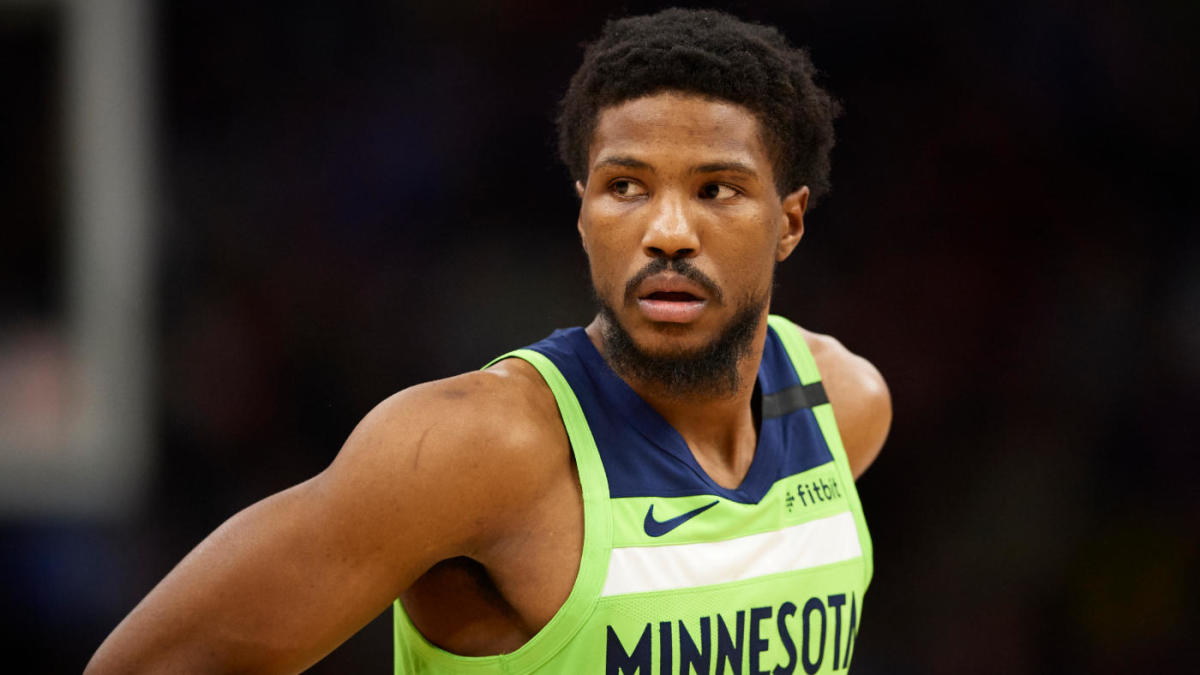 Malik Beasley: Can't tell if his head is in the game or not.

This has been an extremely underwhelming start for Malik Beasley. I'm not even talking about the numbers too. People miss shots all the time. It's HOW he is missing shots. Clanking them off the side of the backboard, over shooting the rim, not even hitting the rim and hitting glass. As a catch and shoot player he currently is one of the worst.

His saving grace at the moment is that he is shooting an excellent percentage from the mid range on a small frequency of attempts from there and his defense has been fine. But if the Timberwolves want to be dangerous, they need way more from Beasley and they need it soon. 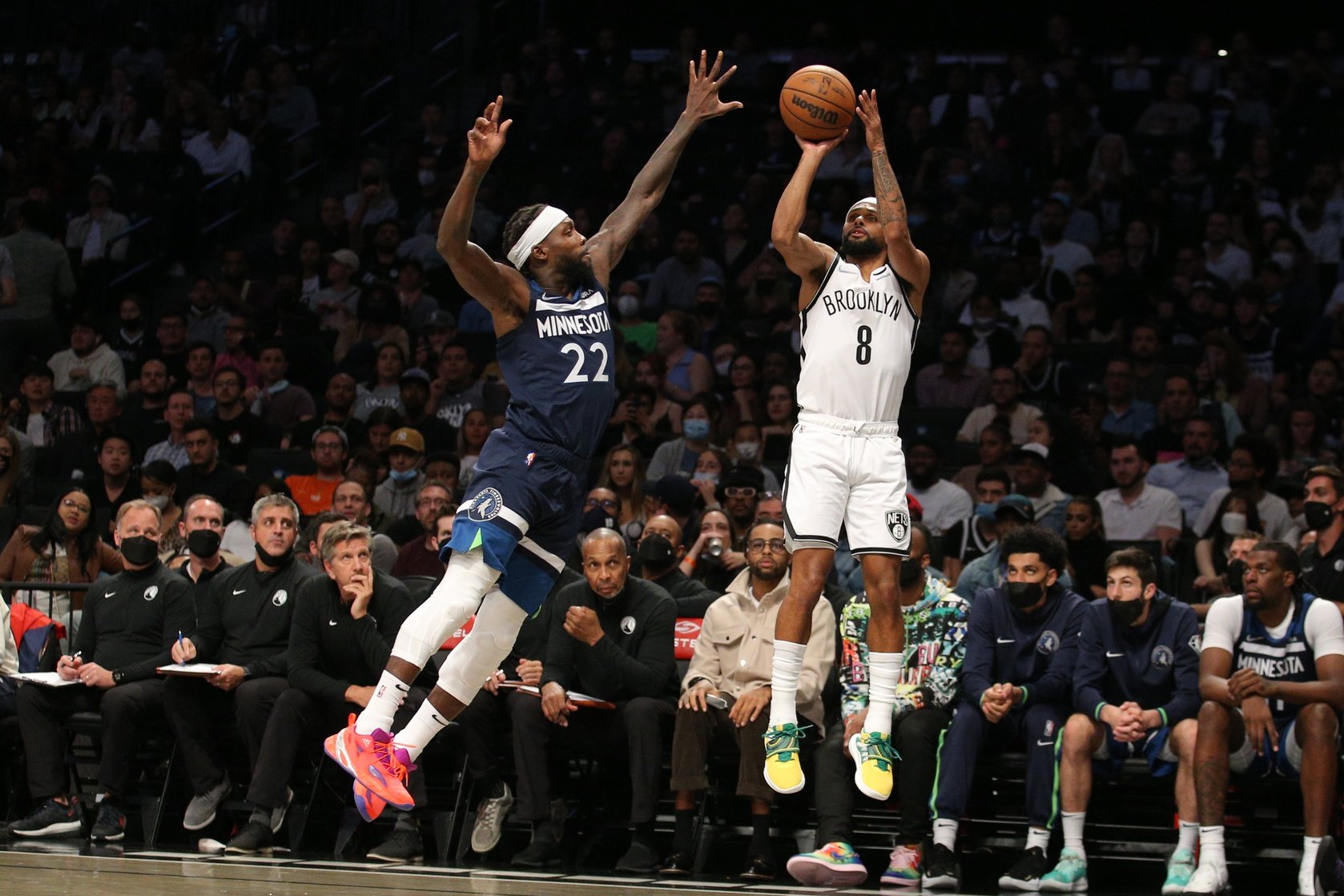 Patrick Beverley: Better than expected but has to limit costly fouls

I think Patrick Beverley for the most part has came into this team and done exactly what he has been asked to do. Be a loud presence, be a great defender, hit shots when they are open and be a steadily good playmaker. All of that he is doing. So what could he possibly be doing wrong? There are times during close games where Beverley would be over aggressive on defense and foul shooters. Sometimes shifting momentum, I don't expect that from him a lot but so far it's been a small issue. 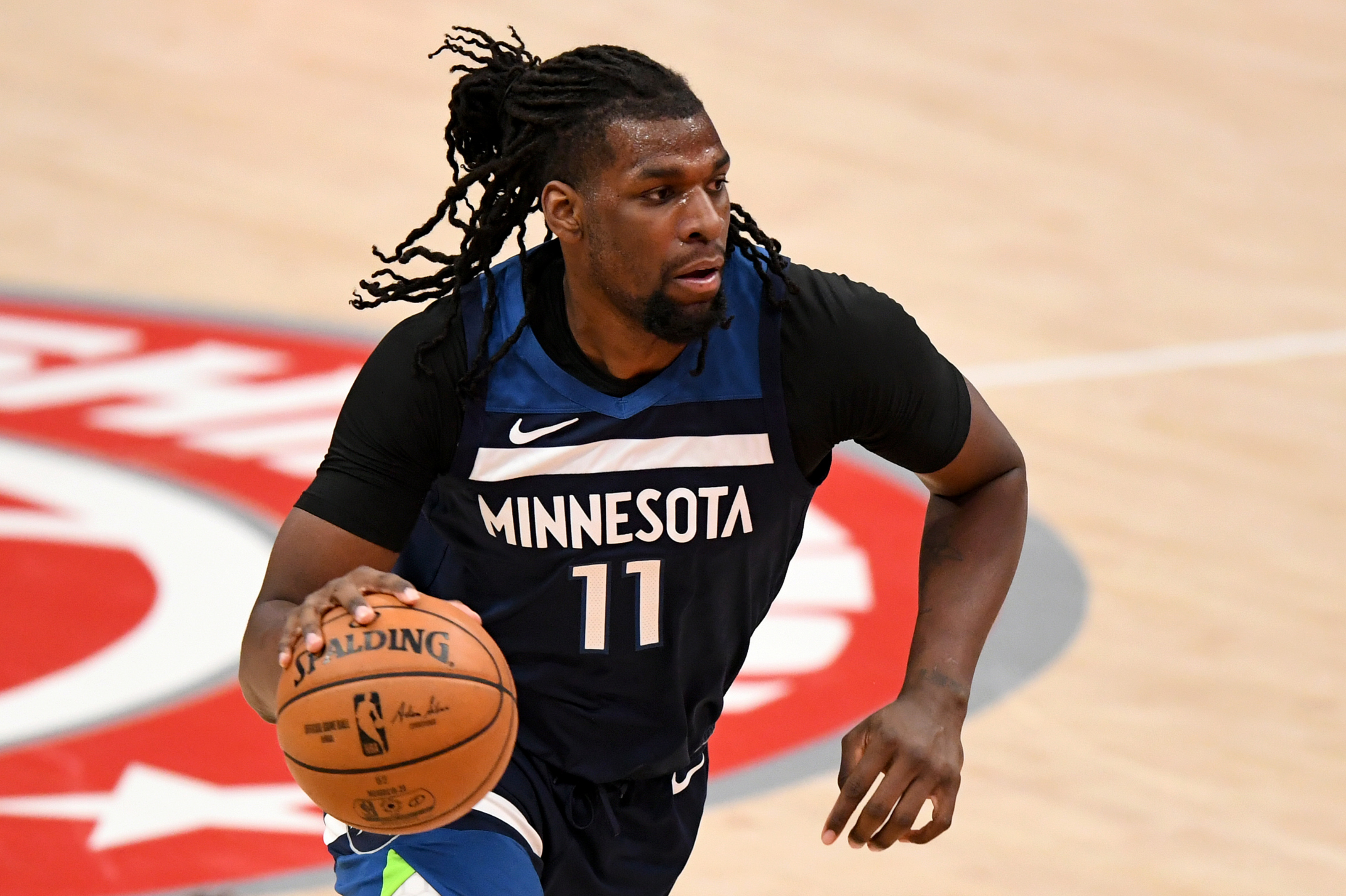 Naz Reid: Slowly coming around this season, needs more PT and more PT next to KAT.

Took a while but Naz Reid is now starting to find himself this season off the bench. He has been an excellent pick and roll partner with both Patrick Beverley and D'Angelo Russell as of late. He has been protecting the rim at a decent rate and he is utilizing his inside and outside game well. When he is on the floor with Towns, the Wolves have two bigs who are good rebounders and shooters which opens a lot for Russell and Edwards. Chris Finch needs to find more ways to get Naz into the game with KAT more. 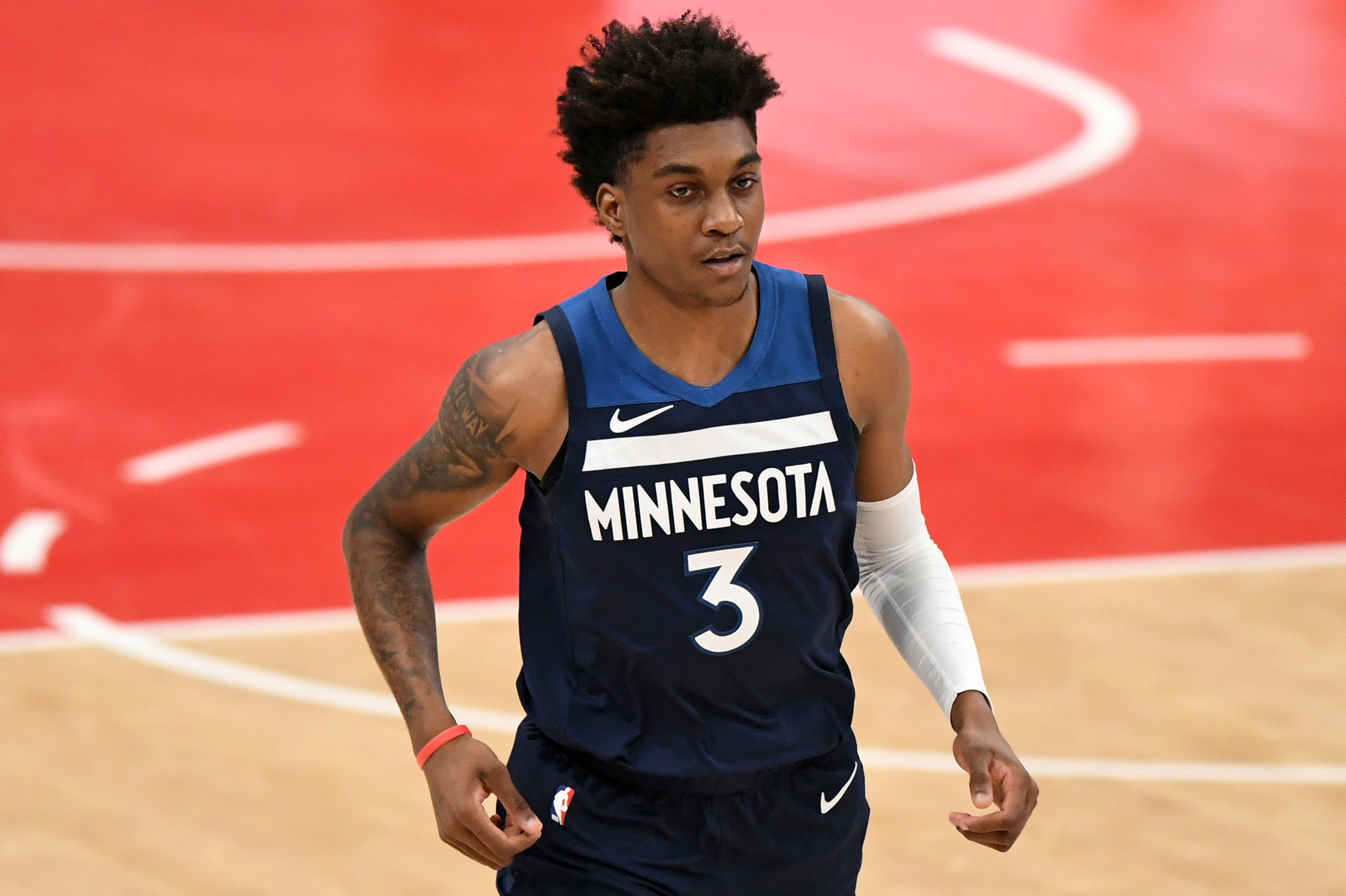 During the first 5 or 6 games Jaden McDaniels didn't look ready for the bright lights at all. Constantly in foul trouble and was no where near as impactful offensively as we wished. I honestly believed he was gonna have the biggest jump this year than anyone and it could still happen. But sharing the floor with Anthony Edwards, D'Angelo Russell and Karl-Anthony Towns must have been a reason he wasn't being looked for a lot offensively.

Now McDaniels has been coming off the bench and his offense is slowing coming together...slowly. As in snail speed slowly. 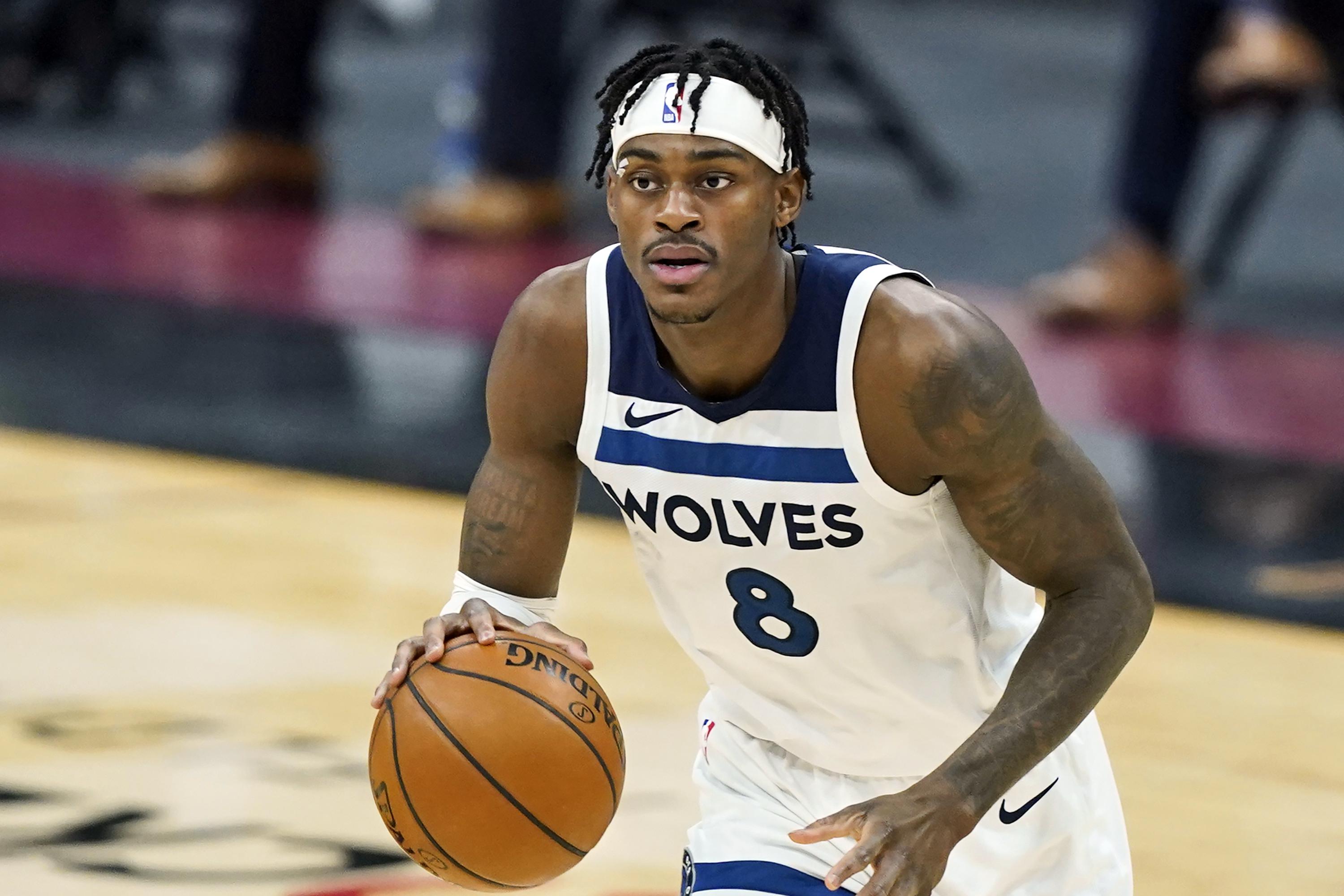 Jarred Vanderbilt: His hustle has been fantastic, but he is an absolute zero offensively

Every team needs a Jarred Vanderbilt, an energy player who can come in, grab a bunch of offensive rebounds, play solid defense and just overall galvanize the group to play harder. But wouldn't it be better if that player wasn't a zero on offense? Yes I am aware Vando scores sometimes but most of it is off of passes from Russell or Towns. He grabs offensive rebounds but has trouble getting them back up. 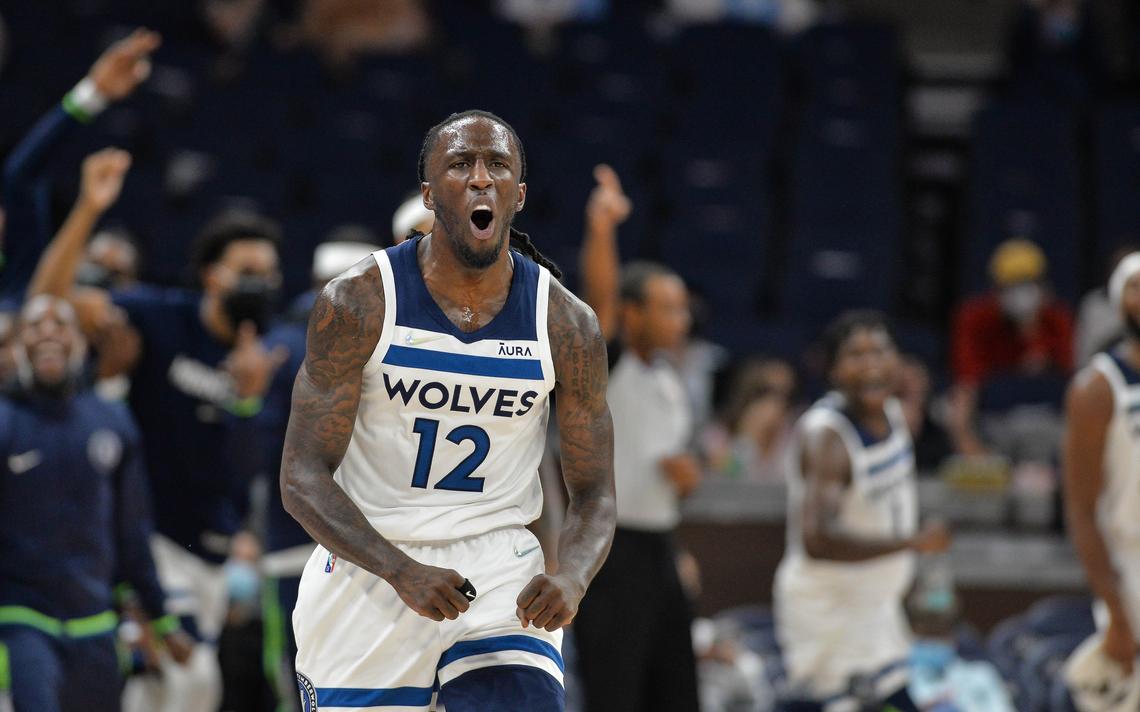 Taurean Prince: It hasn't been what we expected.

The Taurean Prince experience has not been what he had hoped at least for right now and mainly it's because of one issue. He has been doing things at a stellar rate. Defending well, rebounding well, whenever he gets an open shot he has been knocking them down, so what appears to be the problem?

He's never open. And he often does not make the extra pass to an even better shot meaning he is taking more contested shots than open shots. This instance has seen him fall out of the rotation early but at some point I expect him to be back in it. 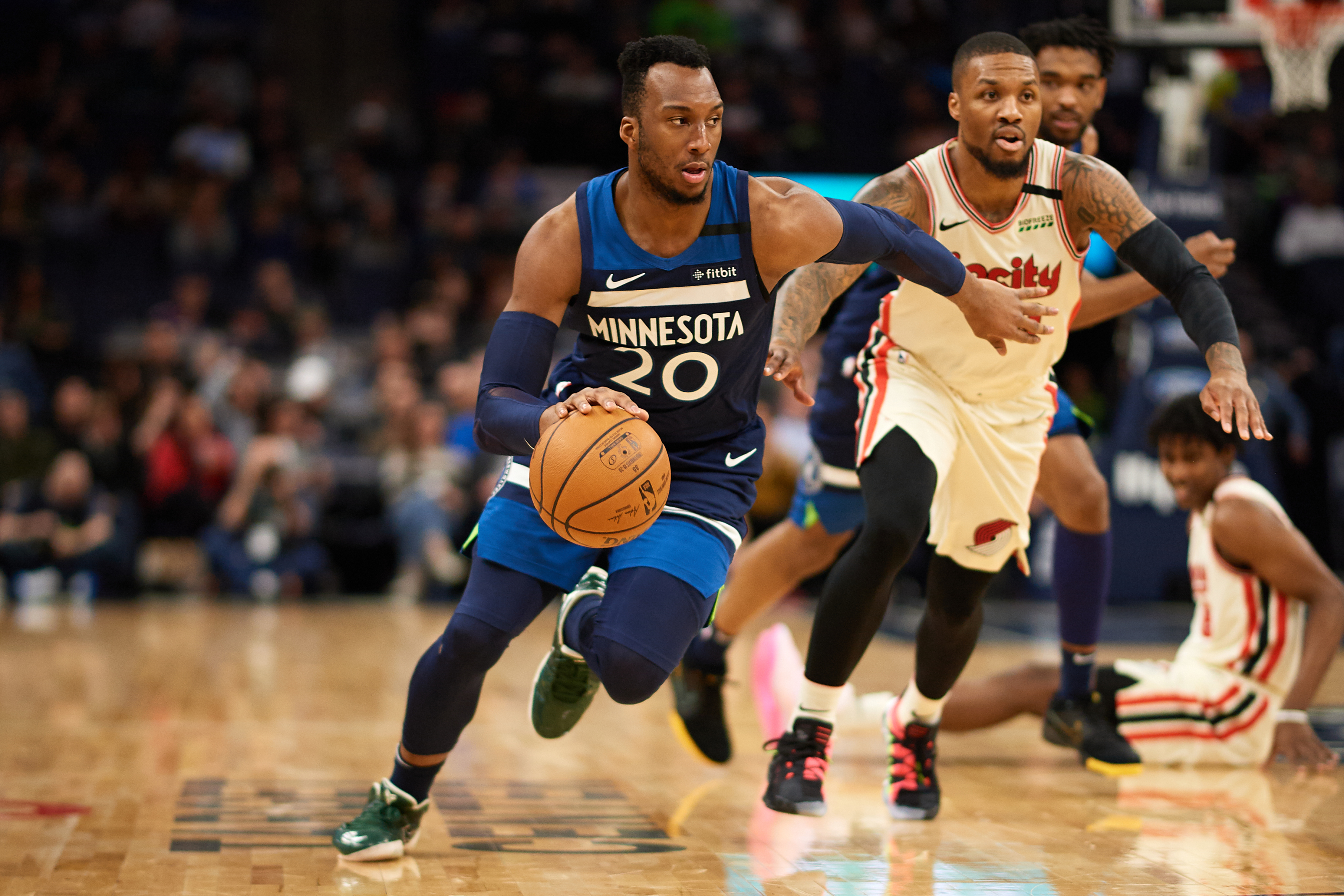 I just can't seem to consistently like Josh Okogie on the floor. Remember what I said about Jarred Vanderbilt being an absolute zero offensively? Josh Okogie is worse. He is a -1 offensively. Can't shoot, not an outstanding finisher, every time he puts the ball on the floor and attacks I begin to cringe. His saving grace is that he plays solid defense without fouling.