It would be first time being back in the Twin Cities for our family since my wife and I graduated from Concordia St. Paul in 2012. As college students, we would find cheap tickets to weeknight games. During the 10-11 season, the Wolves won 17 games, but they were 4-0 with us in attendance. This year, my nine-year-old daughter played her first year of basketball and was intrigued about the Lynx. My eight year old son, spends the majority of his allowance on NBA video games and Timberwolves jersey's on eBay. My 4-year-old son, is still frustrated that Ricky Rubio is no longer with the Wolves (Rubio was the first NBA player he could recognize and name). Most nights during the season, the boys successfully extended their bedtimes by watching the Wolves with me. The Timberwolves are part of our family so we figured we should try to visit them on vacation.

The Timberwolves were not playing in June when we would be heading through the Twin Cities. The Lynx were out of town as well, but we did have the opportunity to take a tour of Mayo Square where the Timberwolves have their front offices and practice facility. It’s right across the street from Target Center. Chloe was our tour guide. She did a great job showing us around. It was really interesting to hear what it was like working with NBA players around. She mentioned she always had to focus on "being cool" and "acting normal" which was something I definitely had trouble doing on the tour.

The first place we visited was the outside of the practice courts. It’s on the second floor which is pretty unique. Here’s my son looking at the court. Like many 8-year-olds he wants to be an NBA player when he grows up. IF he does workout for the Wolves some day, this picture is going viral. We also waved at a tall guy with salt and pepper hair walking on the court. I was pretty sure it was Coach Finch, but Chloe said it was not. It would not be my first time demonstrating that I was not very good at identifying people. 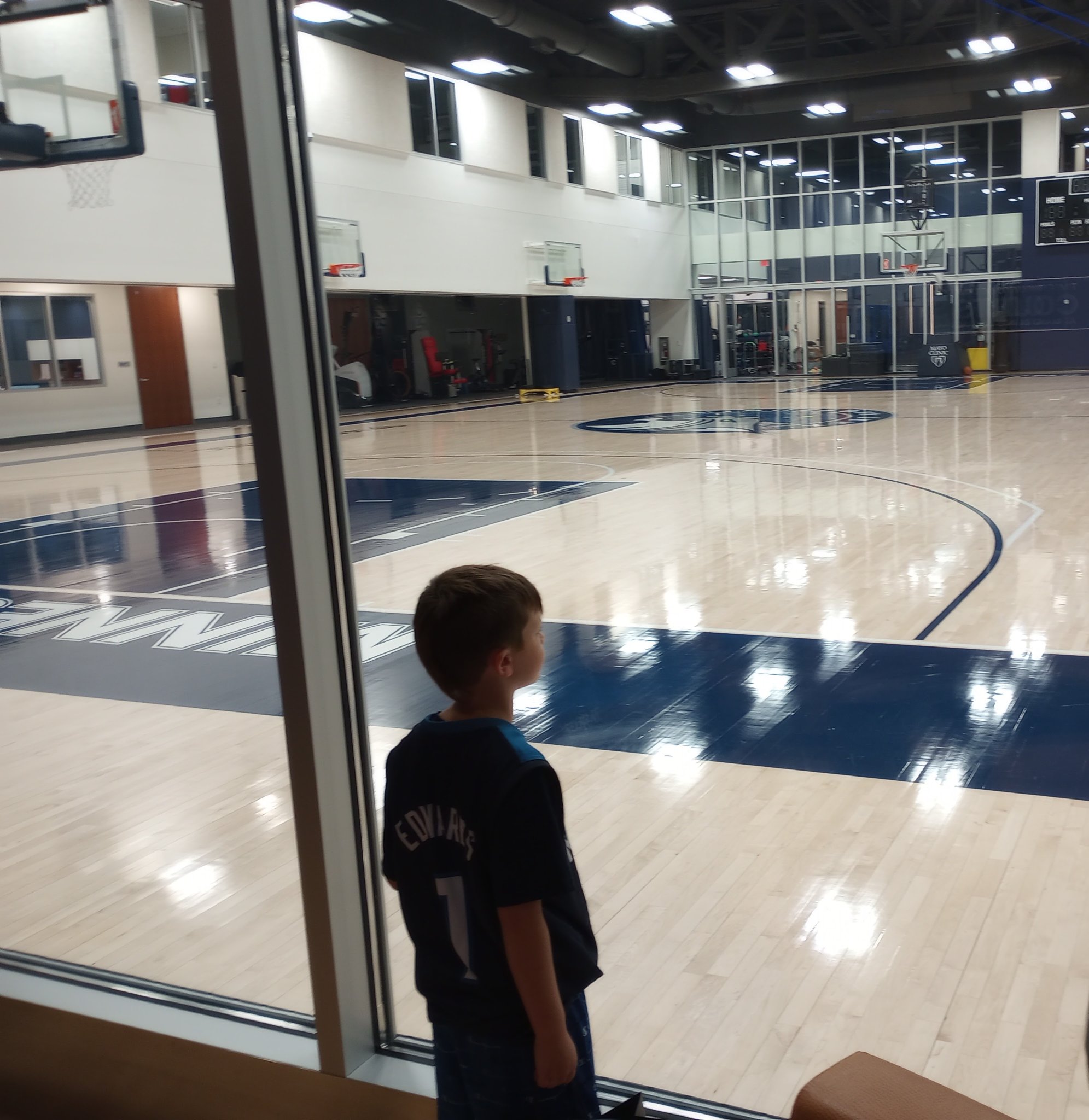 Next, we walked through a hallway with a timeline of pictures from Timberwolves history. They were able to fill the wall with cool events much better than I expected. It featured Rookies of the Year, MVPs, All-Stars, Olympians, ownership changes, and even a few magical playoff runs. 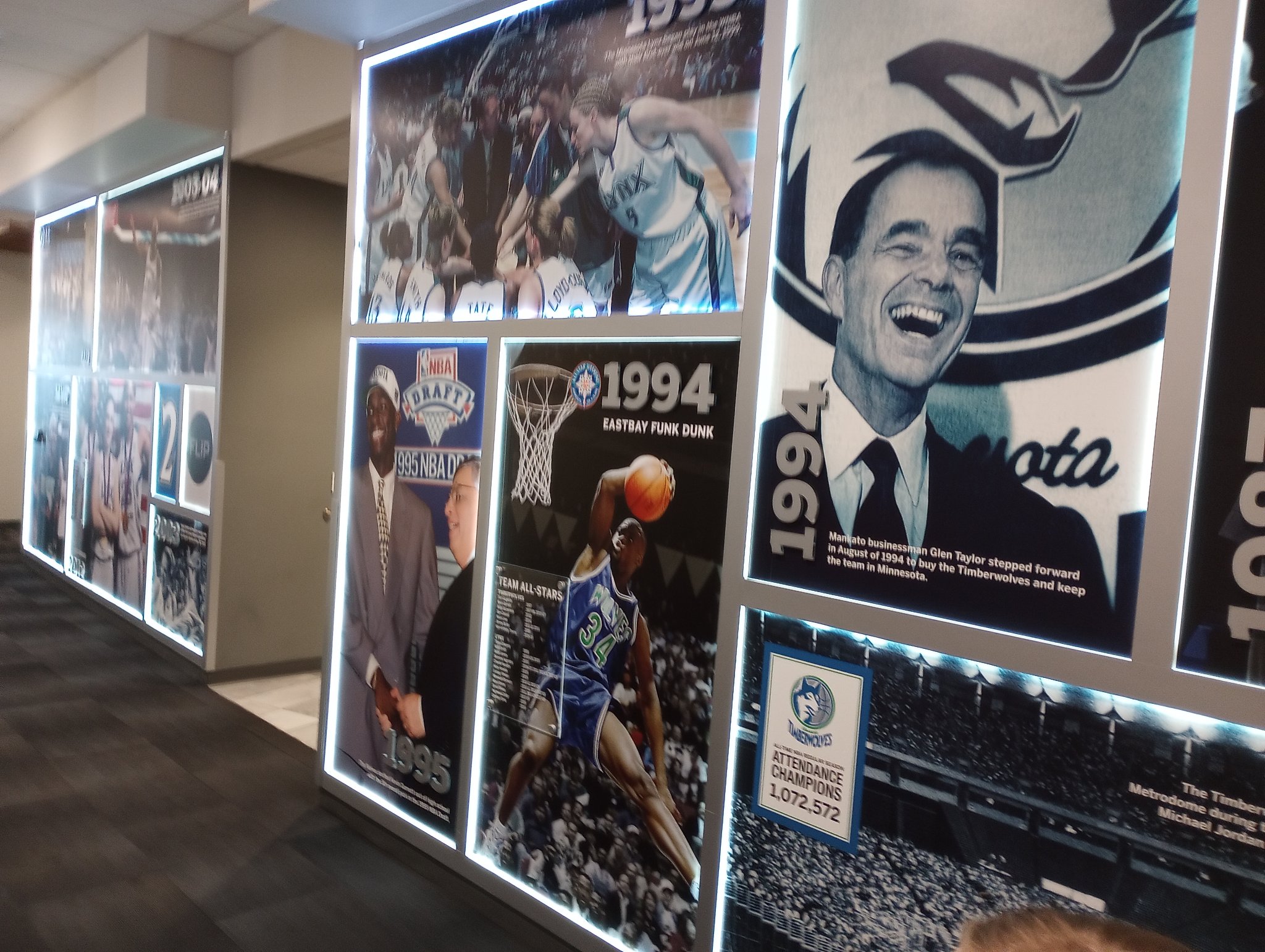 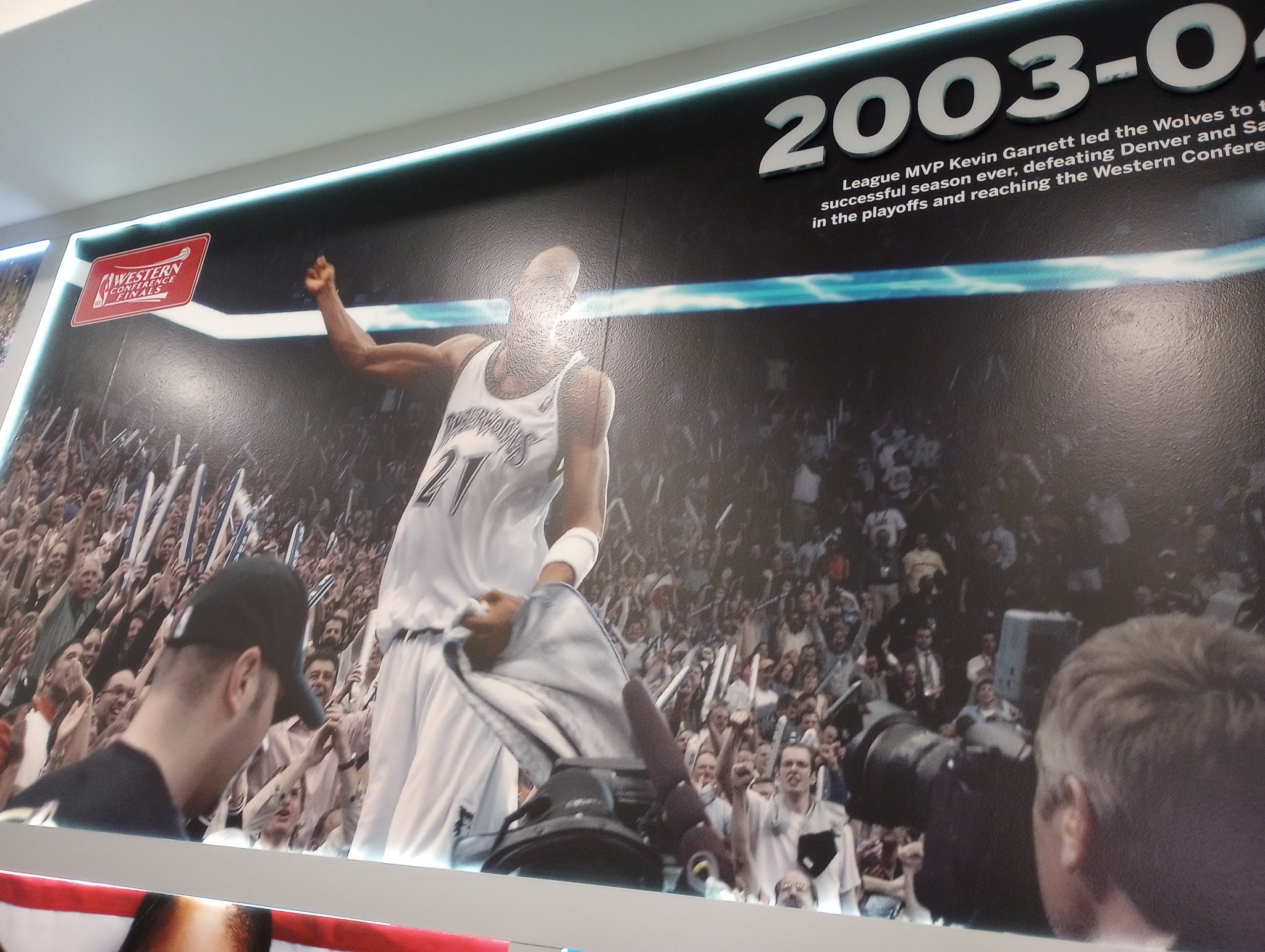 We walked through their office area with lots of cubicles. There are a lot of people who work for the Timberwolves! My wife said it "Looked just like offices in the movies." (Neither one of of us work in regular offices). The offices share a kitchen area with where the players get their snacks too, but we didn’t see any players there that morning. It was only a few days before the draft, but no one seemed stressed. We also didn’t see any clues for the impending Gobert trade. 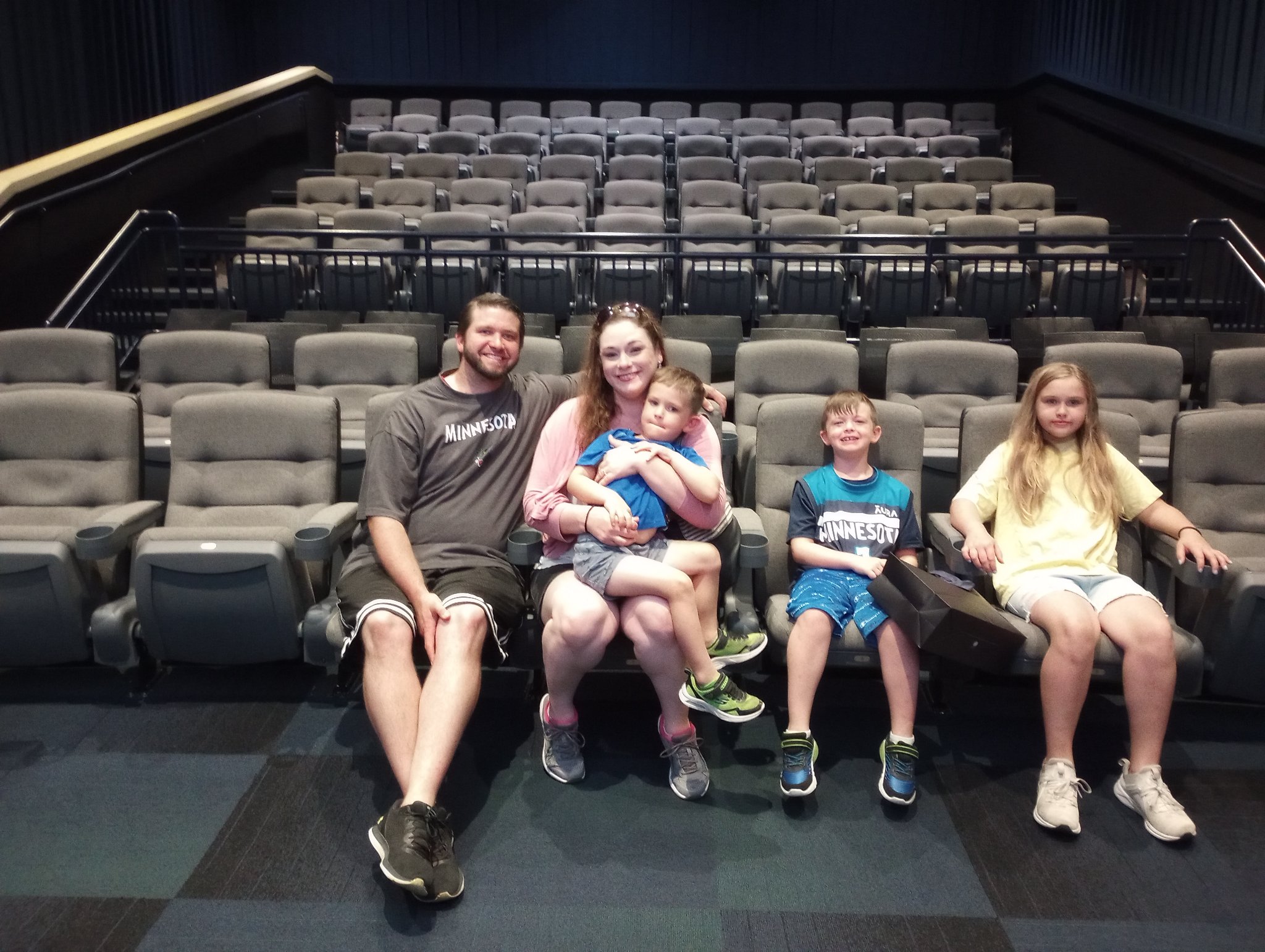 Mayo Square used to be a movie theater. They kept one of the screens in there for meetings and players can use it to play video games. It’s the same theater Karl watched his own highlights his rookie year. Getting ready for a meeting in there was none other than Jeff Münneke the first ever Timbwolves employee and VP of Fan Experience. He patiently took time to listen to my bewilderment that the Build a Bear Workshop in the Mall of America had Bucks uniforms but no Timberwolves uniforms for bears. It wasn’t until later that I connected the dots and he was in fact @MinnesotaMunn on Twitter (a must follow for any Wolves fan).

I waved and said hello to Micah Nori. He’s "The Funny Coach" according to my son because he always slips in silly words in his halftime interview. There’s a great episode with him on Marney’s podcast. He’s the only person I correctly identified. 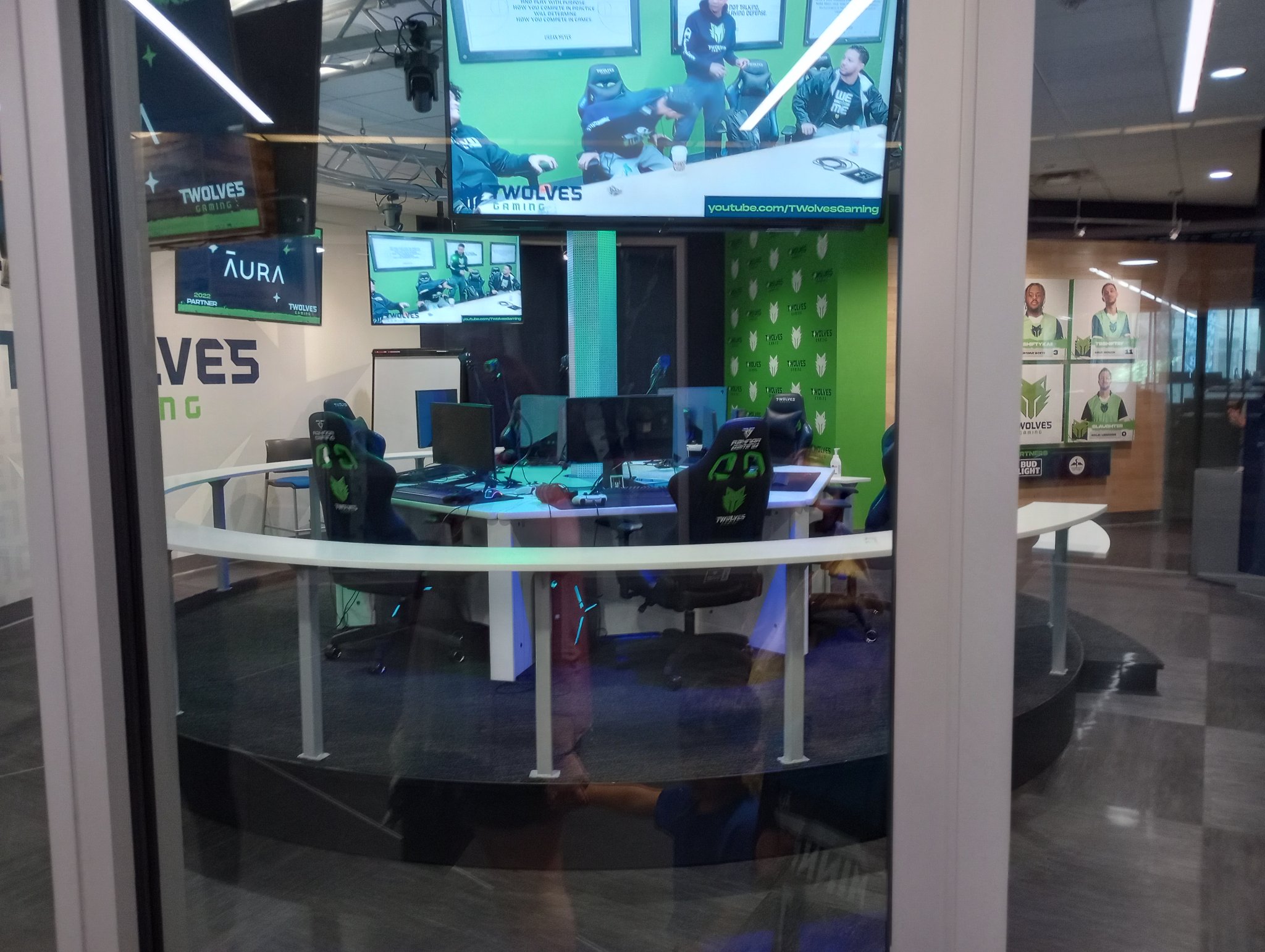 Our last stop was to the Timberwolves E-Sports facilities. The Timberwolves (and most other NBA teams) have professional gamers that play NBA 2K. There’s even a draft and they have a pretty sweet gaming set up to practice. This season the T-Wolves gaming team were league champions! 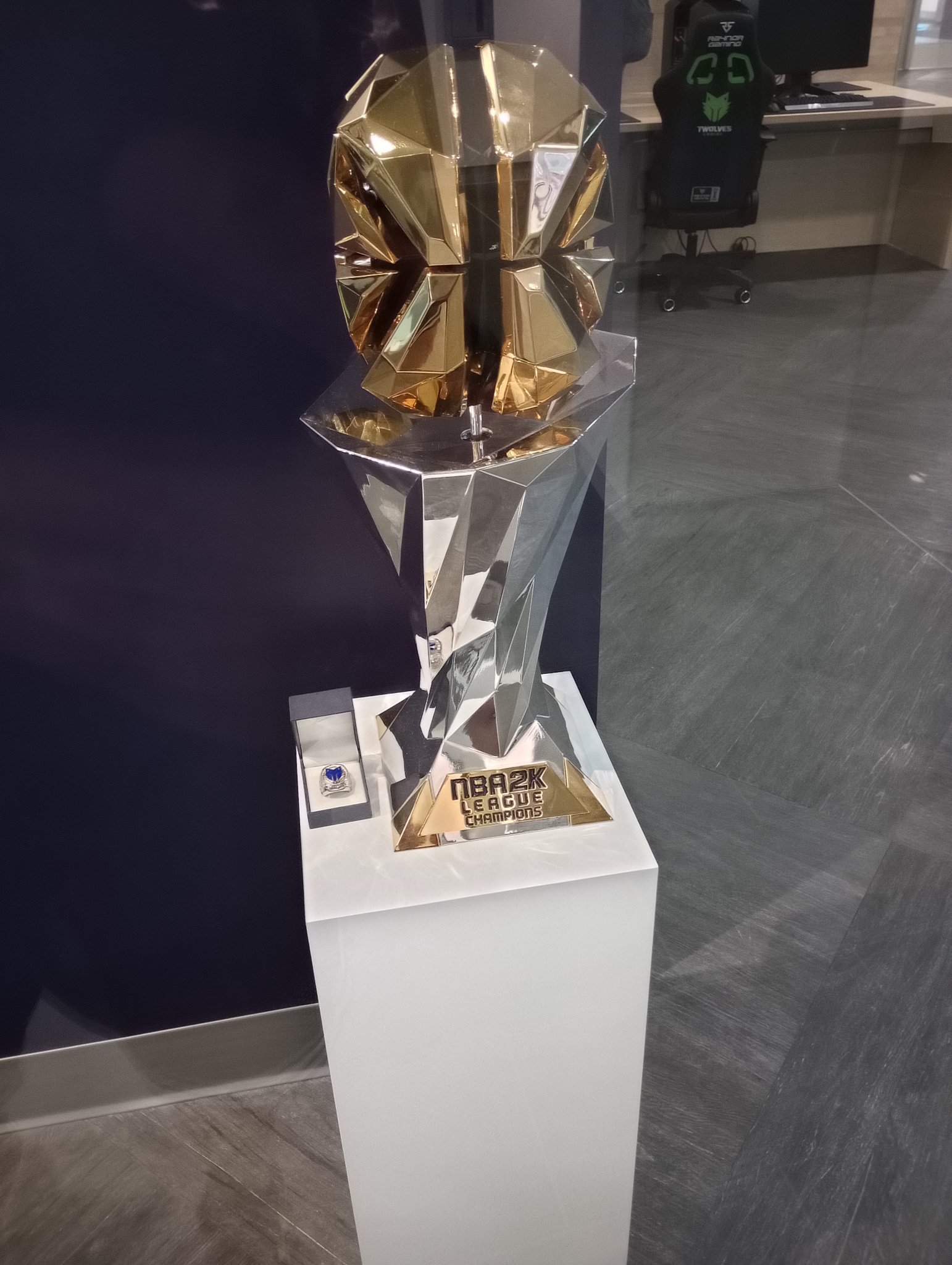 On the way out I said, "Hey Coach" to a guy I always saw behind the bench. Upon further review, it was not a coach but the very important head trainer, Gregg Farnam. I’m sure Gregg and his team will keep the Wolves healthy this season and beyond!

Our whole family (even my wife who was skeptical at first) really enjoyed the tour. It was the best behaved the kids were all day. A special thanks to Jake Vernon the VP of ticket sales who helped set this up for us, Chloe our guide, and all the patient folks at Mayo Square who dealt with this overly excited fan and his family.

Although, there have been some lean years in the past, brighter days are here for the Wolves. One thing that stuck out to me was how much the people in the organization care about the fans. Now there’s going to be even more excitement to share at Target Center and Mayo Square!